Next post
Living off the Grid - Could You Survive an EMP?

Barack Obama’s State of the Union address is tomorrow, and like most of Obama’s speeches, it promises to be painful. Or, depending on how you look at it, it might be entertaining, trying to watch him spin the disaster that was 2013 into a positive.

Be sure to tune back in tomorrow night, where the live feed will be posted. To help get you through the speech, print out a couple of Bingo cards. Whoever is left standing at the end of the night, wins! 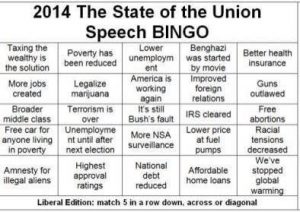