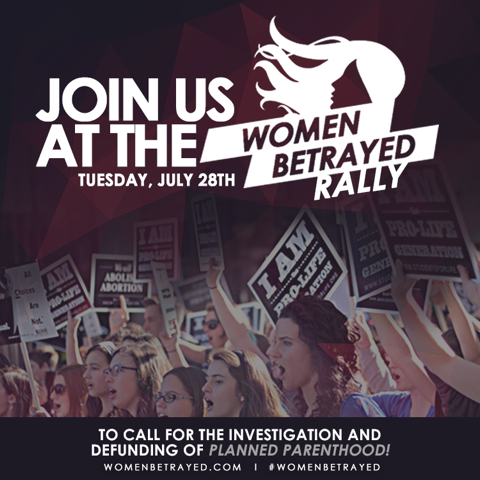 On the heels of a newly released video by The Center for Medical Progress this morning, Planned Parenthood is now facing another obstacle.

On Tuesday pro-lifers in more than 50 cities – and counting – will be rallying against Planned Parenthood under the banner of#WomenBetrayed in response to the gruesome undercover investigative videos released by the Center for Medical Progress over the past two weeks.

Men and women across the United States are coming together to say that women are more than incubators for Planned Parenthood’s organ harvesting. The group behind the movement is encouraging citizens to attend a rally, but they are also encouraging everyone to call their state and federal officials and demand the defunding of Planned Parenthood.

The abortion giant claims they care about women but they don’t – just look at their actions.  Planned Parenthood gets over $500 million a year in our taxpayer money and makes more than $100 million in profit, all while having abortion quotas. The organization has been caught covering up statutory rape, double-billing taxpayers, aiding and abetting sex traffickers, scheduling sex-selective abortions and accepting money to abort African American children.

You can visit the website here. In addition to information on rally locations, they also have the contact information for state and federal officials located conveniently on their website.

So far, a few Presidential candidates have made appearances:

.@SenTedCruz just showed up at our #WomenBetrayed rally in DC! https://t.co/LuxQ04LpQL

Today we take a stand. I have good news. The senate will vote on defunding planned parenthood! #WomenBetrayed pic.twitter.com/5TCB8BNukl

I have a feeling that the most concerning aspect of this movement for Planned Parenthood is all of the young adults involved. Over the past several years, the increase in involvement from young men and women in the Pro-Life movement has been noticeable.

@garrettbooth for #WomenBetrayed: "Whatever your politics are, we're here today to protest a human atrocity" pic.twitter.com/SUQrlSyhoH

Individuals from both sides of the aisle, as well as people of all ages, are being forced to face the fact that Planned Parenthood devalues not only the child, but the mother. Women are finally being hit by the revelation that they aren’t as weak as Planned Parenthood assumes. We’re strong, we’re united, and we care about protecting the weakest among us. Planned Parenthood tries to convince women that they aren’t strong enough to have a child and an education, or a child and a career. They convince women to take the easy way out, which ends up not being an easy way at all. I think back to the iconic words of Mother Teresa:

Abortion kills twice. It kills the body of the baby and it kills the conscience of the mother. Abortion is profoundly anti-women. Three quarters of its victims are women: Half the babies and all the mothers.” – Mother Teresa

“Feminists” have taken to Twitter to express their revolt, which in many instances has been rather comical. The vast majority of the original Feminists themselves did not share similar beliefs with the current Feminist movement concerning a vast number of issues – the most dissimilar views being those they held on abortion. Alice Paul, the author of the original Equal Rights Amendment, once said that abortion is “the ultimate exploitation of women.” Her words were true then, and they’re true now. It is astounding how far the movement has fallen; from protecting life, voting rights, and supporting strong female authors, innovators, entrepreneurs, and the like, to now supporting the butchering of children, the peddling of false equal pay data, and begging for free contraceptives. Now add “fetal organ harvesting” to the list.

Thankfully, as I said before, many are sending a clear message that being the assumed heroes of female empowerment, as Planned Parenthood has been portrayed by Leftists, is very different than actually being the heroes of female empowerment. Planned Parenthood can try and portray themselves as the bastions of women’s rights, but it’s not going to magically change the fact that they’re butchers who were caught red-handed haggling over the price of infant livers and hearts.

“Women are supposed to help and support other women – not use them for profit and sell the body parts of their prenatal children,” said Kristan Hawkins, president of Students for Life of America, the group coordinating these rallies.

and to destroy Planned Parenthood. The board members of this group believe that abortion is “genocide,” and employ people who went to jail for attempting to bomb a women’s health clinic. They are also connected with the man who murdered abortion provider Dr. George Tiller.

CMP has used footage obtained through deceit and unlawful behavior, including possible violations of state recording laws, federal tax laws and falsified state identification. Then, they concoct wildly false stories through selective editing. We expect this video will be no different in that regard; however, footage yet to come is expected to represent an extreme violation of patient privacy by including footage of post-abortion fetal tissue neither patients norhealth care professionals

decides whether to consider this story newsworthy, or whether to use any of this footage at all, we urge you to keep this in mind: The extremists who entered Planned Parenthood labs under false pretenses violated research protocol, and, worse, violated the privacy of patients involved. Those patients’ privacy should not be further violated by having this footage shared by the media.

The storage and examination processes that CMP used to get this footage are medically necessary. It is necessary medical professionals ensure an abortion is complete so that patients do not get an infection. When tissue is donated formedical research

, these steps are also necessary for the donations to be completed. It is also medically necessary that researchers evaluate the laboratory procedures of a medical provider for safety standards and best practices.

Some of the conversations and protocols that occur in medical settings and among professional peers can sound jarring when taken out of context. While this can be difficult to hear or watch, it should not be used as an excuse to defund Planned Parenthood.

CMP gained access to Planned Parenthood facilities under false pretenses and filmed without securing approval from the Planned Parenthood staff being filmed or the patients whose privacy is compromised by this secret videotaping. The material should not be aired.

Please contact me at 651-755-9557 or jaulwes@ppmns.org if you have any questions or need any more information.

I understand Planned Parenthood was ready for all of this to go away the moment it became news weeks ago, being bad for business and all… However, their efforts to erase the videos from the public eye, as well as discredit the organization behind said videos, are continuing to out them as the unmitigated bullies they are, not the loving caretakers of women they adamantly proclaim themselves to be. The truth hurts, and Planned Parenthood is feeling it.

After writing this post I came across an additional bit of information concerning the warning to TV stations, as well as Planned Parenthood’s control on the media. The silence from the media concerning the Center for Medical Progress videos have puzzled many, especially after the splash they’ve made on social media, as well as the investigations they have caused to opened up. However, Sean Davis, writing for The Federalist, might have the answer:

How bad is the baby organ trafficking story for Planned Parenthood? So bad that the nation’s largest abortion provider has hired a pricey PR firm to bully media outlets into not covering the scandal.

According to Politico, Planned Parenthood hired Democratic megafirm SKDKnickerbocker to handle its public relations effort surrounding the widening organ trafficking scandal. In a series of undercover videos released by the Center for Medical Progress, multiple top Planned Parenthood executives are captured haggling over the prices of aborted baby body parts and discussing ways to maximize money earned through the harvesting and sale of human organs.

BuzzFeed, for example, still does not have a single story on its website noting Planned Parenthood’s aborted baby organs-for-Lambos scheme (coincidentally, SKDKnickerbocker recently hired former BuzzFeed reporter Kate Nocera to help handle PR work for its non-profit clients). Neither does Huffington Post. Neither does Vox. The story was trending on Facebook and Twitter, yet three sites that specialize in amplifying trending and viral content refused to print a single thing about the stories. Now we know why: Planned Parenthood likely told them not to.

Well, that just doesn’t look good at all…