Townhall Meeting in Ferguson Erupts into a Brawl

Townhall Meeting in Ferguson Erupts into a Brawl

At a town meeting to discuss the proposal of a civilian review and oversight board in Ferguson last night, tempers flared and resulted in…you guessed it…a brawl.  The photo looks more like an episode of Geraldo or Jerry Springer than a meeting of the people—who do have the right to bring grievances to the government—and their elected officials. 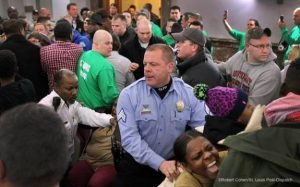 Details are still coming out, but Nick Pistor of the St. Louis Post-Dispatch was live tweeting the craziness.  Twitchy is on top of it as well.

This is not news, for those who have been watching Ferguson since last summer.  In September, the same thing happened.  December?  Yup, then too.

Many of us are no stranger to standing up for our beliefs.  But HOW that is done is also important.  This?  Screaming and acting like children, after looting their own neighborhoods?  No.  Just, no.