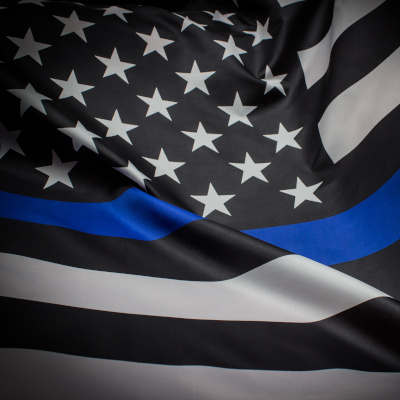 At a time when NFL players wear “social justice” stickers on their helmets and schools are indoctrinating our children against the fundamental values our nation was built upon, yet another school has banned the Thin Blue Line flag. Forget about honoring the good cops. Someone was upset by the flag and by what it represented. So it had to go the way of everything that upsets the Left’s fragile sensibilities. Whats next?

Caelan Lavender is a a junior offensive lineman at Fletcher High School in Neptune Beach, FL. Lavender’s father died unexpectedly last year. Prior to his death, he had been a police officer for 29 years. For 11 games last year, Caelan carried the Thin Blue Line flag to honor his father as the team came onto the field before a game.

This week, Caelan learned he would no longer be allowed to carry the flag. The reason? A few folks took to social media to complain. In this day and age of Black Lives Matter, a cop’s life is of no consequence. Neither is a son’s grief or his love for the father he no longer has. You see, according to Fletcher High School’s principal, Dean Ledford, just the possibility the flag might be viewed as a political statement–and heaven forbid anyone might think the school supports law enforcement–it must be banned:

The flag, which is known as the Thin Blue Line flag, has different meaning for different people, and rather than representing the young man’s personal feelings, it was being interpreted as a political statement of the team and of the school,” Ledford said. “In consultation with the coaches, I determined that the act of using this flag in this personal way, while in the context of the football game opening ceremony, could easily be construed as representing a political position of our school and not just the personal feelings of the student and his teammates. Therefore, I have determined that it is no longer appropriate to continue.”

Consider this in light of what the NFL is allowing–nay, encouraging–its players to do. Watch any football game and you’ll see stickers on the backs of helmets proclainging “Black Lives Matter” or displaying the names of those the BLM is using as their rallying point. That is a matter of social justice. Honoring the memory of a man who just happened to be a cop is a political matter.

Worse, this isn’t the first instance of the Thin Blue Line flag being banned in public schools. On 9/11 this year, two high school football players from Ohio took to the field carrying the Thin Blue Line and the Thin Red Line flags. Now, they were told ahead of time not to take the flags onto the field. According to the school:

Little Miami is saddened to see this story take such a negative turn. While we understand these students’ desire (to) show their support of first responders, they did not obtain permission from district officials. Administrators must act when students break the rules.

The Patriot Night program to memorialize the victims of 9/11 was already part of our pre-game ceremonies on Friday and the American flag is the first thing through the tunnel every Friday night. . . Little Miami always has – and always will – support our first responders, our veterans, and all who sacrifice to maintain our freedoms.”

So why was permission denied for the boys to carry the flags? Again, from the school:

As a public school, we must take great care in maintaining an objective position on various political issues. Our action in guiding the student and his teammates to an appropriate way of expressing their personal views should only be interpreted as an action to maintain the school’s role as a venue for constructive dialogue, and not a proponent of any particular point of view.”

So, on 9/11 it is inappropriate to carry a flag honoring police officers. More concerning is the way the administration can say, and with a straight face no less, that the school’s role is “as a venue for constructive dialogue”. What is constructive–much less dialogue–about banning that flag on that particular day?

At least President Trump wasn’t having any of it. Nor were the thousand or more folks who signed the petition demanding the boys’ suspensions be rescinded. As for Trump, he had the two boys join him onstage at his Dayton rally Monday night. Between that and the pressure brought on the school by all those outraged at the boys’ suspension, there are now two young men who know how important it is for all of us to stand up for what we beleive in.

They, as well as Caelan Lavendar, learned another lesson, this one much harder to swallow. Right now, no matter how valid your cause, no matter how deeply you believe in it, if it doesn’t fall in line with the cause du jour of the screaming idiots on the Left, they will figuratively pillory you for having it.

The Left continues to paint conservatives as racist, sexist, and whatever other “ist” they can think of. Yet, look around and ask who are the ones doing their best to squelch freedom of speech. But it goes beyond that. They don’t want you thinking about an issue unless your thoughts align with the approved party line.

Where is it going to end?

And don’t they realize that after they come for you and me, their own kind will turn on them? These folks really do need to study history.

Yes, there are some bad cops. But they are in the minority. Do we really want to see what life will be like without those good cops to help protect our lives and our belongings? Today, we are forbidden from showing the Thin Blue Line flag on 9/11 and at other occasions. What will be forbidden tomorrow?

The only way to stop it–assuming it isn’t already too late–is to make sure we do not get a Biden presidency (or perhaps I should say a Harris presidency). The only way to do that is for each of us to get out and vote. We need to maintain, and preferably expand, our majority in the Senate. We must retake the House. Failure on any of these could seal our country’s fate.

And I don’t know about you, but I’m not ready to give up on our nation without a fight.

Fly your Thin Blue Line flags, my friends. Fly it proudly beside the Stars and Stripes and your Gadsden flag. Let your voice be heard. Show these young men they are not alone in honoring the good cops and other first responders.