Previous post
Bowe Bergdahl: Truth, Justice, and the Men Who Died For Him

Next post
Video Surfaces of Bergdahl Being Released to U.S. Special Forces

The President’s decision to pull out of Afghanistan is about his legacy.  A feather in his cap.  “I ended the war in Afghanistan.”  Damn the consequences.  Those consequences happen to be women.  The real war on women.  The war on women that the liberals have chosen to ignore.  Where were all those feminists last Tuesday when the President made his announcement?  I didn’t even see a hashtag, #what about the women?  Why weren’t they clamoring and shouting asking about the fate of the women once we leave, and the embedded Taliban takes over and continues on with their Jihad?  Is his legacy more important than the fate of the women of Afghanistan? 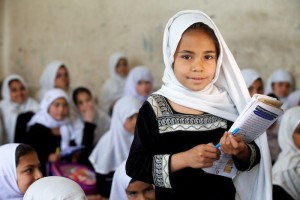 From the New York Times;

“The government and the people are facing tremendous challenges,” said Fawzia Koofi, a member of Parliament and women’s rights advocate. She added: “I think at least we need another 10 years of direct support and five years of indirect support from the international community, especially the U.S., to turn this country into a proper and prosperous country.”

Does he even say “I ended the war in Iraq” anymore?  He did at one time.  Damn those consequences too.  Iraq is already lost.  His premature pull-out there resulted in a myriad of insurgent groups.  The two main forces are ISIS  (Islamic State of Iraq and the Sham) and Naqshbandi Army. Yes, Sunni warring with Shiite.  Everyone wants to be in charge.  They are all ruled by the ideology of Islam, Sharia is their law, jihad is their purpose, and Al Qaeda is at the core of all of them, even though Al Qaeda is very angry with certain jihadists in Afghanistan and Pakistan who sided with ISIS.  Here is a letter in response to another accusing each other of not being vile enough.  There is bound to be some implosion there.  May was a very deadly month.

The Iraqi people saw a chance, a glimmer of hope, a light, and Obama snuffed it with his pull-out.

Let us not forget the Morsi-Muslim Brotherhood debacle in Egypt that he wholeheartedly supported with their full on Sharia war against women.

I wonder if that silly little mistake made last week prior to his trip outing the main CIA operative in Afghanistan was on purpose.  Knowing full well that this operative would contradict the president’s assumption about Afghanistan’s ability to defend herself and his audacious proclamation once again that Al Qaeda is on the run, which he said prior to his re-election.  Then, BOOM, Benghazi.  This time, though, he didn’t exactly say they were on the run.  Rather, he alluded that there were scattered and different unorganized factions of other groups romping about, which included the Taliban.  Now with 5 more Al Qaeda masterminds recently released from Gitmo with jihad and revenge deeply embedded in their heartless souls, they just got stronger.

Of course, President Hamid Karzai  and President Obama aren’t really on the best of terms.  Karzai doesn’t feel that Obama is doing enough to strike Al Qaeda and the Taliban down, especially those taking refuge in Pakistan.  They couldn’t come to a consensus on a bilateral security agreement.  So, Obama left, saying he’d just deal with the next elected president.  The war isn’t going to end just because he says so.

“Obama said this week that he would leave Afghanistan in a responsible way. Leaving in 2016 is not responsible,” said one Afghan battalion commander who spoke on the condition of anonymity because he was not authorized to discuss the matter publicly.

A brigade commander noted the Afghan military’s lack of air support and heavy artillery, and said building those capabilities would be “impossible” by 2016 or 2017.

The Taliban just wants Obama to get on with it, get out already. More from the NYT;

Even the Taliban offered a tepid response on Wednesday. The insurgents condemned Mr. Obama’s announcement, but dispensed with their usual rhetorical flourishes.“What American leaders might do in two years, they should do it today,” they said, adding that the Taliban “jihad won’t be canceled by the decrease in number of soldiers.”

So until the entire region is sharia compliant, its not over for the Taliban.  And as we know, sharia means little girls don’t go to school and women don’t have any rights. Honor killings are a man’s right.

Is President Obama’s legacy more important than an entire country’s female population?  Or are they just collateral damage to his presidential legacy?  And when you leave the field of battle before the other side is done fighting, you don’t get to call it a “withdraw.”  The other side usually calls that a “surrender.”