Next post
Is Palin leaving the Republican GOP to start the "Freedom Party"? And Weekend Links!

by Catherine Wilkinson in Headlines 27 Comments

If you think the media and corporate witch hunt for Paula Deen is about racism, you’re wrong.  Even the guy she called ‘the-word-that-must-not-be-spoken-except-by-rap-stars-that-visit-the-White-House’ thinks the racist thing is nuts.

The “foodie” elite have been after her for years.  The very idea that a Rubenesque, butter-lovin’ jovial Southern woman  could swoop in and grab a huge chunk of the lucrative food television/cookbook market right out of the bony fingers of bi-coastal very serious and boring food assholes…well, food assholes have been livid ever since she drawled, “more butter, y’all!”

Food assholes don’t like “real” American cooking.  And by “real”, I mean the kind where you go to Wal-Mart or the local supermarket to get ingredients that aren’t certified organic and chef approved, to cook good food that your friends and family will actually like.  Food assholes will rapture on about “regionally authentic” biscuits and gravy, but the biscuit flour better be locally ground from organic wheat watered by the sweat of unicorns and the gravy rendered from fat from heirloom hogs that listen to Avett Brothers songs piped into the barn.   And they REALLY don’t like untrained, uneducated, rotound, slightly unhealthy, Southerners that steal their epicurian thunder.  The minute Paula Deen sashayed onto the scene with her folksy talk and simple, available, familiar, non-precious ingredients to make sometimes fattening food Americans really love and eat….they’ve had it in for her.

Because food assholes are really food nannies.  They want to be the arbitrators of taste and nutrition.

Which brings us to this….the number one food nanny in all of America.  And why Mrs. Obama might be just a tiny bit pissed at Miss Paula.  And if Michelle ain’t happy, you can bet lots and lots of corporate and media honchos ain’t gonna be happy either. 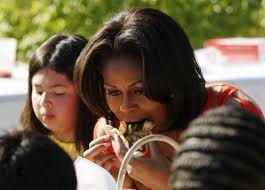 And now it all makes sense, doesn’t it?  Following the liberal smear playbook, label your opponents racists and ruin their lives the best you can.

And if you don’t believe me, you’re a racist.