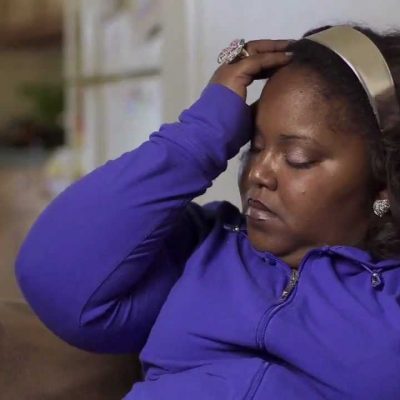 The Measure of a Man

The Measure of a Man

by Catherine Wilkinson in Headlines 6 Comments

Much will be written about President and Mrs. Bush today.  Given the proclivities of the usual suspects in the not-so-mainstream media, much of it will be negative and full of character analysis by people who have never met him.  My own experience with President Bush doesn’t involve politics.  My observation and subsequent opinion of this man is based solely on my personal belief that a person’s true character is revealed when they are with children and when “the public” isn’t watching.

Our daughter Molly Kate has hydrocephalus.  Because of this condition, she has spent much time in the hospital and has endured 56 brain surgeries over her almost 26 years.  One particularly bad stretch was over the summer of 2004.  She had 14 surgeries within a month and was in intensive care at Phoenix Children’s Hospital for most of the summer.  There is, of course, much more to her personal journey, but she doesn’t like to be defined by her condition, and besides, this is about President Bush.

As a result of her challenges and her always positive outlook on the situation, she was chosen as Arizona’s Ambassador to Children’s Miracle Network, an organization that raises money and awareness for children’s hospitals across the nation.  As a result, Molly Kate, her Dad and I, and her oldest sister travelled to Washington D.C. and Florida for a series of events….which included a day at the White House. 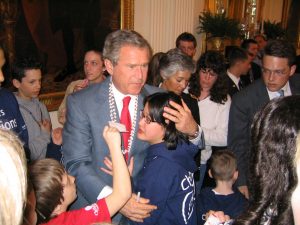 The wonderful blogger, Lorie Byrd, wrote a blog entry about this, which included my observation about President Bush that afternoon which is much more accurate and descriptive than anything I could remember and write now, some 9 years later….

“These were kids that have obvious mental, physical, and emotional challenges. George W. Bush understood that having media there would have caused confusion and anxiety for these kids. He continually asked his Secret Service agents to “stand back” and “leave these kids alone, please!” when they were crawling all over him.

At one point, he was holding a small tot, who was wailing away with no intention of stopping. President Bush looked at us all and said, “Well, he sounds just like my colleagues in Congress!”

He treated my own daughter with unbelievable patience and concern. She spent several minutes with him, telling him about our son, a US Marine stationed overseas. He stopped, looked her right in the eye and said, “You tell your brother that I said to tell him that I am grateful to him for his service and that he has a great little sister”.

Sharing this story with others who do not get the chance to observe, first-hand, the compassion and quiet dignity this man has, is a way I can help with President’s Bush re-election. To me, all the issues are important, but a man who behaves with integrity when no one is watching is a quality I value most.”

Also,  Betsy Newmark had a wonderful post about President Bush that included some more of my observations of that afternoon:

While at the White House, I spoke with several media types that have coordinated with both current and the previous Clinton administrations. I had a long conversation with a media guy who had also worked with the Clintons during their eight years. He was young, aggressive, Democratic, and did some work for the current administration. He said, at first, he was unrelenting in his disdain for Bush…that he was a “loyal” Democrat. But, after working with Bush on and off, for the past 4 years, he absolutely “loved” the President and that working with the Clintons was “hell”…they were both demanding, rude, arrogant, paranoid people, who were late for everything. He said that President Bush was a “good, decent man, who respects everyone he works with”.

Another thing. This event could have been pure positive PR heaven for the President, given the nature of the organization and the people it represents. But he insisted on it remaining private with no cameras, media, etc…it wasn’t even on his daily agenda. He offered himself extensively to the people involved who wished to meet him and talk with him. He continually told the Secret Service to “stand back”, so we could have close access to him.

Oh.  After the event, Molly Kate wanted to send President Bush a copy of the photo above.  I told her that he gets hundreds of letters a day, and he probably wouldn’t see it.  But she went ahead and sent it with a “thank you” for being so nice to her.  About 4 weeks later, she got a letter from the White House.  From President Bush.  Friendly and personal, he asked about her brother and how he was doing and how he hoped she was back in school and doing well.  He thanked her for the photo and that he showed Mrs. Bush and she loved it.  It was not the typical form letter from a WH secretary.  There were too many references to the day.

And he thanked her for coming to visit him.

That’s the kind of man President Bush is.  Let the pundits expound on things they know nothing about.  As usual.

Because I know that for 54 kids that afternoon, he was there for THEM.

And there were no press or punditry there.