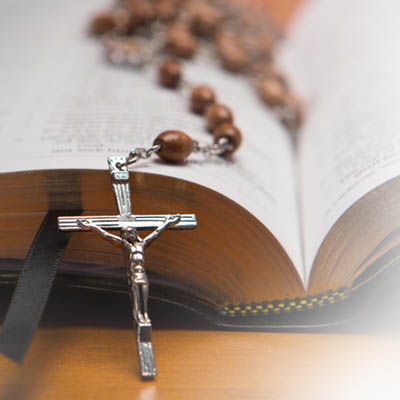 It’s been long a tenet of Marxist and Progressive ideology to call for the destruction of Bible-based religion. Now far-left, rad-mag The Atlantic takes Christophobia to new heights with proclaiming Catholic rosary beads an extremist militia symbol.

Just as the AR-15 rifle has become a sacred object for Christian nationalists in general, the rosary has acquired a militaristic meaning for radical-traditional (or “rad trad”) Catholics. On this extremist fringe, rosary beads have been woven into a conspiratorial politics and absolutist gun culture. These armed radical traditionalists have taken up a spiritual notion that the rosary can be a weapon in the fight against evil and turned it into something dangerously literal.

If you can get past the assertion that a popular rifle (about 19 million in circulation) is a sacred object without laughing out loud and scrolling on by, Toronto-based author Daniel Panneton goes on to weave a fantastic tale as believable as if you found The Handmaid’s Tale in the non-fiction section.

Only about 10-14 years ago, gang culture in California [are you surprised …?], especially among Hispanic gangs, adopted rosary beads as a gang symbol. Such symbols – from colors to tatoos to bandanas to how white athletic socks are worn – are rightfully concerning when trying to keep innocent people safe, but never once in all the articles written about it were Catholics themselves blamed for the beads being appropriated by gangbangers. Indeed, it took a Federal judge to get a Catholic student reinstated to school after being kicked out for wearing rosary beads.

However, as we’ve seen lately, the Left has its own Ministry of Truth and any flag or symbol or word that interferes with their agenda is to be designated a hate symbol and anyone associated with it is to be treated as a hatey hater.

Not enough that the execrable Merrick Garland has never rescinded the memo about parents who criticize their school board are “terrorists” but every patriotic symbol is now the tell you’re in the presence of dangerous (to the Regime) persons. Insurrectionists Who Are A Threat to Our Democracy!!! YEARGH!!

Never mind the ubiquitous presence of Che t-shirts on university campuses. Carrying a Bible or wearing rosary beads or a kippa marks one as being worthy of little more than pity or contempt.

Judeo-Christian values of individual responsibility and support of traditional families are a threat to the militant secularism of the Left and cannot be allowed to stand. All Marxist regimes have always targeted religion and family – from the USSR through Mao’s Cultural Revolution. If remnants of Christianity and Christians are allowed to exist, they are to be gelded or co-opted.

Daniel Panneton spends much of his article railing against traditional families, masculinity and, of course, any unapologetic display of faith. He offers this strange claim:

One Catholic online store … sells replicas of the rosaries issued to American soldiers during the First World War as “combat rosaries.” Discerning consumers can also buy a “concealed carry” permit for their combat rosary and a sacramental storage box resembling an ammunition can.

Note the scare quotes around “combat rosaries” as if the WWI rosary were a weapon instead of it just being a designation of a rosary crafted with materials in order to be rugged enough to carry into combat.

Wait until Daniel finds out about the rosaries make of parachute cord for Desert Storm soldiers that were called Ranger rosaries.

Evangelicals and other traditional Protestants in the wild have long caused the Left to seethe. Now Catholics who slip the Leftwing leash and muzzle are targets.

Hmmmm … Pelosi and Biden are alleged Catholics … should Daniel write about them next?

Oh golly, Miss Molly, but The Atlantic is on full panic mode:

The Atlantic is having convulsions over here with how fast they keep changing the headline of their bigoted Rosary attack article. The latest edition also dropped the disgraceful 'bullethole rosary' graphic pic.twitter.com/rpCFFAUFmF

This is why our link at the top is to an archived copy of the article, including the bullet-hole graphic. The Atlantic can’t memory-hole that version and the backlash couldn’t happen to a nicer bunch of Christophobes.