Taking the Pledge Of Allegiance Out Of Schools

Taking the Pledge Of Allegiance Out Of Schools

by Ruthie Thompson in military 6 Comments

How many of you would be willing to sacrifice just 10 seconds out of your day to thank a Vet? I know that me personally would be honored to. It is such a small appreciation to show for such a tremendous debt. That is what a local Veteran’s group asked of the Sioux Falls, S.D. school district. Their only request was to mandate that the district’s schools recite the Pledge of Allegiance every day to show their respects to the flag and those that have defended it.

Veteran Jim Borman, along with a handful of other veterans in the area, addressed the school board with their request. “This is what we are asking, ten seconds a day from stand up until sit down – ten seconds to recite the Pledge of Allegiance each day,” Borman said.

However, the school district could not oblige. They voted down the proposal that would have mandated that the Pledge be recited every day at all levels of school. They did however, uphold the mandate at middle school level and it was already in place for elementary level. But at high school level, the school board refused the request citing that it would be a challenge for them to find the ten seconds a day required for those students to recite the Pledge. “Just the challenge of being able to find a period within a high school day to be able to say it consistently appeared to be a challenge,” said Doug Morrison from the Sioux Falls school board.

When I was still in school, I remember having to drag myself out of bed very early in the morning.There was always chaos of some sort from the moment that I woke up to the moment that I entered the classroom. We had chores to do before we could even start getting ready for school. There were times when I had to rush my chores and scramble to finish my last minute homework. Whether it be the bus ride to school or meeting the bully in the halls, something was always happening that would cause me to run to the classroom at the very last minute.  We had to be ready and seated before the bell would ring. Once the bell would ring and we were all in our seats, the teacher would stand. That was the cue for us to all get up and put our hands over our hearts and turn to face the flag. It was a daily tradition. It didn’t appear to be a chore for us, it was just something we did. We all knew the words and that is how we would start our day – by pledging allegiance to our flag. I will admit that at the time, I really didn’t take much meaning in to the “pledge” when I would recite it. There were some days I would admire it and there were days when a hint of patriotism would swell inside me. Although it didn’t seem to mean too much to me at that time, what it brought to me later in life is a gift that has stayed with me and is a gift that I am able to pass on to my children as well.

I was born on the 4th of July. We had a big family with eight kids. My parents struggled financially but somehow managed every year on MY birthday to load us all up and take us to see the fireworks. We had to travel approximately 30 miles or so to Klamath Falls to see them. Yes it was America’s birthday too, but it was also my birthday and my parents would make my birthday special by allowing us to celebrate it with all the flags, the fireworks and all the hoopla that goes with a typical 4th of July celebration. It was during those times that I really started to grasp the feeling or the “spirit” of what it is like to be fortunate enough to live in America … the land of the free. It was those little things that I could carry with me throughout my life that make me appreciate today, the symbolic  freedom that is displayed from a simple display of the flag, of the United States of America. There were many times throughout my life when my “spirit” was stronger than others. Ronald Reagan was a big influence on that. He instilled patriotism in our hearts and brought me a new- found appreciation of our military. My father was a Marine and served in the Korean War but I didn’t appreciate the many sacrifices nor did I take the time to really understand it until Reagan became our President. Reagan was known as “the great communicator” and truly I understand why. He brought pride to our country and an appreciation for our flag, our military and our country in general. The events of 9/11 also brought us together as we were not Republicans or Democrats when that occurred. We were all Americans. President Bush consoled a nation in grief and reminded us of our strength and pride as a country. He brought us together to unite against an unforeseen evil that would test our “spirit”. The pride in all of us peaked as we grabbed our flags and proudly displayed them.

Is it too much to ask for ten seconds of our time out of the day to acknowledge this great symbol of freedom and those who have defended it?  I am sure that the district can find a way to fit the Pledge into their hectic schedule if they really want to.  It is a small token of appreciation for those who have bravely earned it. The Pledge may not mean much to the students reciting it now, but later on in life it could just make a difference. As for me, it started in a small classroom… standing up with my hand over my heart. 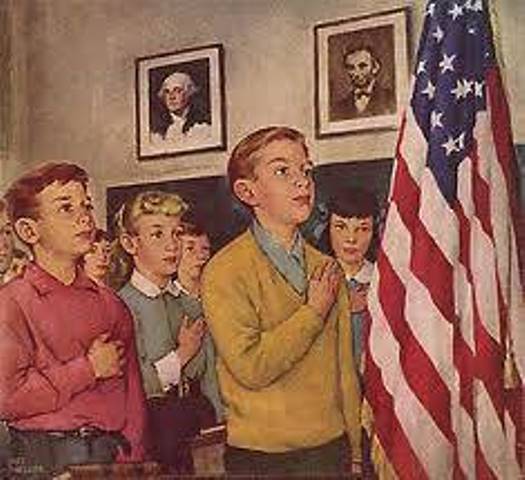