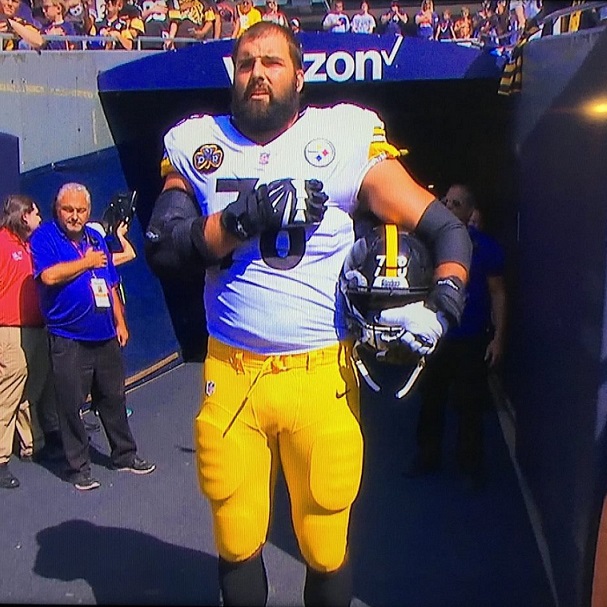 by Deanna Fisher in Headlines 19 Comments

Amidst all of the #TakeAKnee chaos and PR nightmare that the NFL has gotten itself into, the Pittsburgh Steelers announced that they were just going to stay in the locker room until the National Anthem was over.

(Coach Mike) Tomlin had said before the game that Pittsburgh’s players would remain in the locker room and that “we’re not going to let divisive times or divisive individuals affect our agenda.” Tomlin added that the Steelers made this choice “not to be disrespectful to the anthem but to remove ourselves from this circumstance. People shouldn’t have to choose.”

Notably, the coach was on the sidelines during the anthem, according to the AP.

However, one Steeler came out of the tunnel and stood alone, hand over his heart, for the National Anthem. And that player was West Point graduate, Army Ranger, and Bronze Star recipient Alejandro Villanueva.

No Steelers were on the sideline during the anthem.

LT Alejandro Villanueva, a veteran who served in the Army, stood near the tunnel. pic.twitter.com/JOviLUAtiF

Alejandro Villanueva, a US Army Captain, Army Ranger, and Bronze Star Recepient, refused to stay in the locker room for the national anthem. pic.twitter.com/zATA7JuqrY

Villanueva did three tours of duty in Afghanistan. He knows the price so many men and women paid for our freedom. What a great patriot!

absolutely commend Villanueva for standing today. He may have stood without his team but #SteelerNation stood with him

The NFL has dug themselves into a hole. I have no idea if they can find a way out. I’m also not sure that I particularly care if they do. But I do predict that Villanueva’s jersey will become a top seller. Rangers lead the way!

UPDATE 2:45 PM EDT:
Villanueva’s actions really should come as no shock to anyone, given his past statement on the protests touched off by Colin Kaepernick.

“I don’t know if the most effective way is to sit down during the national anthem with a country that’s providing you freedom, providing you $16 million a year … when there are black minorities that are dying in Iraq and Afghanistan for less than $20,000 a year,” Villanueva said. “It’s his decision. Obviously he has brought up the issue in a great way. But I think if he encourages other players or other people in the stands to sit down, it’s going to send the wrong message.

“He has to be a little more careful and look at the big picture of the things that he’s doing, because as a service member, I have to understand it. But he’s an athlete, he’s got a huge platform, he has to see the impact he has on other people’s lives.”

“I will be the first one to hold hands with Colin Kaepernick and do something about the way minorities are being treated in the United States, the injustice that is happening with police brutality, the justice system, inequalities in pay,” Villanueva said. “You can’t do it by looking away from the people that are trying to protect our freedom and our country.”

If a Steelers teammate decided to join Kaepernick in sitting, Villanueva said he’s not sure how he’d react, but will “stand very proudly” every time the national anthem is played, singing every word of the song because of what those words mean to him.

Villanueva said he often tells teammates that though he’s one of the cheapest left tackles in the league ($525,000), living in the U.S. is like “winning three lotteries.”

And today, Villanueva proved that he meant every word that he said.

Steelers president Art Rooney II, on the other hand, offered up this weak-kneed milquetoast statement, probably crafted by the team’s legal division.

Seems as if only one person in the Steelers organization has a spine, and that man was standing for the National Anthem today.