Next post
How Shocking: Labor Department to Delay Jobs Report Until After the Election 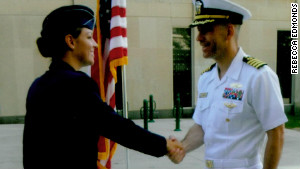 Rebecca Edmonds is a Navy brat who says she always wanted to serve in the military. She participated in ROTC, and the Air Force offered her a full ride to Marquette University. Edmonds wanted to become a nurse and serve her country, and this seemed like the perfect way.

She ended up being commissioned as a second lieutenant in the Air Force by her father, a Naval officer.

But, whoopsy! It turns out that Edmonds had found out she was pregnant before she was commissioned. The Air Force does not allow single parents to enlist. Edmonds kept quiet about her pregnancy until after she had been commissioned, and when she eventually spilled the beans, she was kicked out and told she’d have to repay her $92,000 scholarship.

And now, Edmonds is crying foul.

Today, her dream of serving her country has been shattered.

… Edmonds’ mother, Karen, a military wife for 25 years, said deployments are tough on all service members and their families, married or not. If her daughter were to deploy, Karen Edmonds said, her grandson would be well cared for by an extended family that includes the child’s father and both sets of grandparents.

Edmonds’ mother said she believes the policy discriminates against single women and encourages pregnant single women to abort their pregnancies.

“The Air Force is making an assumption that single parents cannot provide adequately for their children if deployed,” Edmonds’ mother said. “That’s what burns me up.”

After she was “dis-enrolled” from the Air Force — the military term for the separation from service — Edmonds appealed to the Air Force and her congressman, Rep. Paul Ryan, now the Republican nominee for vice president. The Air Force rejected her initial appeal but said this week that her case is now being reviewed at the highest levels. Edmonds has also hired a military attorney, Daniel Conway.

Edmonds, her family and her attorney claim that the Air Force is encouraging its members to give up their children, through either adoption or abortion, a position they say was revealed in a comment from an Air Force colonel.

In a letter responding to Ryan’s inquiry on Edmonds’ case, Col. Kelly L. Goggins wrote, “If Ms. Edmonds had reported her pregnancy she would have been placed on medical recheck status until she gave birth. At that time she would have been been able to commission if she were not a single parent, for example, if she were married, or had given the child up for adoption.”

And now of course, Edmonds is the poor, poor victim who didn’t do anything wrong, and she only wanted to serve her country, and shouldn’t she be able to?

Uh, no. I hate to break it to you, sweet-cheeks, but there is no right to serve in the military. Plenty of people want to serve and can’t, for a variety of reasons. Being a single parent is just another one of those reasons.

Of course, the real issue here is that Edmonds violated her contract. She did it. She had sex, with the full knowledge that doing so could result in an unintended pregnancy, which it did. She knew that her contract stipulated that she could not have dependents. The fact that she wants to serve her country is commendable; the fact that she chose to keep her baby despite her desire to serve her country is also commendable and in my opinion, very brave. But the fact remains that she signed a contract and then violated the terms of that contract.

Not only did she violate the terms of that contract, but she wasn’t truthful about it. She purposefully hid the pregnancy, which constitutes fraud — she was required to report the change in her medical condition, and she didn’t.

And then there’s this little nugget:

It further stated that her file contained eight forms in which she was briefed on the medical change reporting requirement. Edmonds said no one ever brought the issue up during her subsequent counseling sessions while she was enrolled at Marquette.

So she signed eight forms which addressed the requirement for her to report any change in her medical condition, but she says it isn’t her fault because no one ever told her about it? Call me crazy, but she doesn’t come across as someone who potentially should be leading airmen if she can’t even be bothered to read paperwork she signed.

The fact of the matter is, she chose to engage in potentially risky behavior, and now she doesn’t want to pay the consequences. Not only did she get pregnant, but she LIED about it on top of that. The funny thing is, there would have been a simple solution to her problem which involved neither adoption nor abortion: marriage. Had she married the father of her baby, her problem would have been solved. But she didn’t want to do that, nor did she want to abort her child or give it up for adoption.

That’s understandable. But it doesn’t change the fact that she cheated, broke the rules, lied about it, and now is trying to make herself out to be the victim in this situation.

Looking at this story, all I can think is that this girl has shown that she is the least qualified person to be a commissioned officer in the military and lead troops into potentially deadly situations. She most certainly is not a victim.