Next post
Uvalde: Fire All The Cops Except One

As the Left grows bold in its desperation, and Vichy Republicans cling to their hems, the tales of dishonorable, dishonest and downright vicious skulduggery abound.

Illinois Democrats try to force gas stations to campaign for them

As of July 1st, IL will suspend their gas tax for six months — you know, ending just after the mid-term elections — AND the law requires gas stations to post, at their own expense, a sign that touts this wonderful granting of [temporary] alms to the peasants. Thankfully, the Illinois Fuel and Retail Association (IFRA) has a contingency plan:

If the courts ultimately rule in favor of the state, IFRA will provide member gas stations with signs to post. The proposed sign the Illinois Fuel and Retail Association will display reminds motorists that “Illinois politicians have more than doubled the gas tax since 2019.” It also states lawmakers “have decided to delay their tax hike until after the election,” and informs the public the signs have to be posted to avoid a $500 per day fine. The signage tells drivers the truth about Illinois gas taxes — and directs them to use the Illinois Policy Institute’s gas tax calculator to see the true cost of taxes at the pump.

Punch back twice as hard. 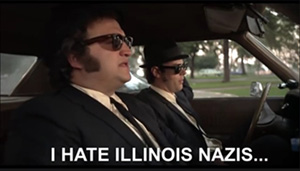 Creepy Joe’s administration is brimming, not just with vicious authoritarian wannabes, but with the most precious dilettantes this side of the French court of the late 1700s. Petey is notoriously invisible, but it appears he got his lavender, silk-lined knickers-in-a-knot when his own airline flight was cancelled. Cue the hissy fit and wielding of his pool noodle of righteous mandate.

Following Buttigieg’s own flight being canceled, forcing him to drive from Washington to New York, he said his department has authority to enforce action against airlines that do not sufficiently maintain consumer-protection standards, potentially requiring them to hire more staff.

Buttigieg said his department could take enforcement actions against airlines that fail to live up to consumer-protection standards. But first, he said, he wants to see whether there are major flight disruptions over the July Fourth holiday weekend and the rest of the summer.

You know, maybe the previous mandate to vax-or-be-fired didn’t work out so well?

While crime increases across the board, Democrats can be counted on to take the side of the criminal (as long as the perp isn’t a white cisgender male, of course)

A California bill to prohibit arrests for loitering with the intent to take part in prostitution has been sent to Governor Gavin Newsom’s (D) desk after passing the state legislature.

Senate Bill 357 would get rid of the misdemeanor law that doesn’t allow people to loiter in public with the intention to carry out prostitution. Those in favor of the bill say that police use the loitering restrictions to unfairly go after Californians of color, as well as transgender people.

Chicago police officers will no longer be permitted to chase people on foot over minor offenses, the department stated on Tuesday.

This is totally social Justice. https://t.co/kGcKnPUqcd

Another Democrat of Honor

There’s an old staying that a liberal is just a conservative that hasn’t been mugged yet. Actually, Leftwing poltroons just move to a better neighborhood.

A left-wing state lawmaker who has pushed for cutting police funding first moved to the district she is seeking to represent in Congress because “safety issues” near “the projects” in Harlem prompted her to shack up with her tech bro then-fiancé in the Financial District, The Post has learned.

Assemblywoman Yuh-Line Niou (D-Lower Manhattan) told a local publication in 2016 — when she was campaigning to initially get elected to her current seat — that she headed to the wealthier Manhattan neighborhood because she witnessed a pair of disturbing crimes and fell victim to one.

“I actually was robbed when I was living in Harlem. My boyfriend at the time, my fiancé, didn’t think I was safe up there, so he told me to move in, and so that’s how I moved to the Financial District with him,” she explained in an interview with the Lo-Down NY.

Democrats aren’t changing and they have no honor. Remember in November and make them irrelevant.