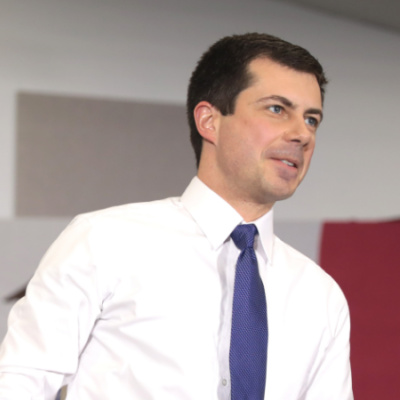 Secretary of Transportation, Pete Buttigieg, is nearly invisible and clearly incompetent. He has been in that office for nearly eight months. Other than kvelling about being the father of twins and getting glowing coverage, he has done NOTHING while our supply chain crumbles.

Is there anyone in the entire Biden Junta who is competent at his/her position? You there in the back. Correct. There is absolutely no one in the Junta who is even in the ball park of competent. From top to bottom and side to side, this is a Confederacy of Incompetents. Kacklin’ Kamala is the worst. Pete “What, me worry?” Buttigieg is the invisible incompetent.

I urge you to give the fact sheet a read. It is typical government triple-speak.

And, it’s so buzz-wordy. Take a look at this subhead: “Establish a whole-of-government effort to monitor and address transitory supply chain challenges.” Whenever they say “whole-of-government” or “all hands on deck”, that means nobody is in charge and nothing will get done.

Where is Pete Buttigieg in all of this? Again, from the fact sheet:

The Administration will establish new Supply Chain Disruptions Task Force to provide a whole-of-government response to address near-term supply chain challenges to the economic recovery. The Task Force will be led by the Secretaries of Commerce, Transportation, and Agriculture and will focus on areas where a mismatch between supply and demand has been evident: homebuilding and construction, semiconductors, transportation, and agriculture and food. The Task Force will bring the full capacity of the federal government to address near-term supply/demand mismatches. It will convene stakeholders to diagnose problems and surface solutions—large and small, public or private—that could help alleviate bottlenecks and supply constraints.

Pete Buttigieg is one of the three Secretaries on the Supply Chain Disruptions Task Force. Stop laughing. Nothing is going to get done. Pete has been too busy:

"Transportation Secretary @PeteButtigieg, a former Navy intelligence officer and 2020 presidential candidate, said that being a first-time parent was the 'most demanding thing I think I’ve ever done.'" https://t.co/1HRiuNk5AC 🧡🌈 #PFLAGProud #ProudParent

Mazel tov. He should at least try to learn what the Transportation Secretary is supposed to do. Let’s be clear, Pete Buttigieg was a terrible choice for the job. On December 18, 2020, The Washington Post published a letter to the editor. Here is a portion of that letter:

President-elect Joe Biden’s selection of former South Bend, Ind., mayor and 2020 Democratic Party primary rival candidate Pete Buttigieg as the next transportation secretary was disappointing. The Transportation Department has 55,000 employees and a budget of $87 billion. It is composed of the Federal Highway, Transit, Motor Carrier Safety, U.S. Maritime and National Highway Traffic Safety administrations, along with the St. Lawrence Seaway Development Corporation and its own Office of Inspector General. Mr. Buttigieg ran a city of 100,000 with 1,143 employees and an annual budget of $358 million.

There are hundreds of better-qualified city and state transportation commissioners, transit agency presidents and others who have significant experience in many of these units within DOT. Many spent years managing thousands of employees and budgets in the billions. They would have stood head and shoulders above Mr. Buttigieg in their ability to hit the ground running such a complex agency.

Daddy Pete showed up on CNN with Brianna Keilor today to talk about opening the Northern and Southern Borders to “vaccinated” travelers. It would have been nice if Keilor had asked Daddy Pete about all those unvaccinated illegal aliens who have been crossing for the last nine months. That would have required “journalism”. They also discussed the supply chain.

“We are relying on supply chains that were built generations ago. It’s one of the reasons why this entire year we have been talking about and working on infrastructure and are eager to see Congress to act to get this infrastructure deal through,” Buttigieg told CNN’s Brianna Keilar on “New Day.”

Um, although white boards are still used, most of what we know as supply chain management actually came out of the University of Michigan in 1999. And:

“This is a largely private sector system, and a global one at that, but there are a lot of steps that we can take as an administration, as an honest broker,” Buttigieg said on “New Day.”

Governments around the world disrupted the supply chain when they shut down their countries. You broke it. You fix it, Buttigieg.

I know you probably thought being Secy of Transportation would be a pretty sleepy gig. But we've got a supply chain crisis, overwhelmed ports, a trucker shortage, airline workers walking out over the vax mandate, & sky-high gas prices.