Obama Is Santa For Dictators

Obama Is Santa For Dictators

Yesterday, President Obama visited with our military while on vacation in Hawaii. Josh Lederman of ABC News elaborates:

President Barack Obama marked the end of more than a decade of combat in Afghanistan by paying tribute to America’s military, telling troops on Christmas Day that their sacrifices have allowed for a more peaceful, prosperous world to emerge out of the ashes of 9/11.

At an oceanfront Marine Corps base in Hawaii, Obama told troops that while tough challenges remain for the U.S. military in hotspots like Iraq and West Africa, the world as a whole is better off because American troops put country first and served with distinction. He said Americans and their president could not be more thankful.

The President is indeed correct that tough challenges are in place and ahead for our men and women in the military. However, it is very disingenuous of this President to look at our world and tell us that it is more peaceful than it was prior to 9/11. We can’t ignore the fact that Iraq and West Africa are not the only hotspots that our military faces on the world stage. And we certainly cannot ignore the fact that President Obama seems to be more interested in playing Santa to dictators rather than protecting American interests here and abroad.

For example, Russia is dealing and reeling with an economic crisis; some of which was brought on by Putin himself and the rest because of Western sanctions and oil prices dropping like a stone. So much so that many additional areas of the Russian economy are hurting. According to BBC News Europe:

Mr Putin, who has been hit by increasing economic woes, said that high prices encouraged the consumption of illegal and possibly unsafe alcohol.

Russia’s currency, the rouble, has lost value recently due to falling oil prices and Western sanctions.

Russia and their vodka issues aren’t the only one we have to be concerned about. Lets talk about those NORKS and that pesky rotund dictator. As everyone knows, the Sony hacks and threats by North Korea have driven the news cycles, caused Hollywood’s knickers to get into a twist, and the screening of a movie (one that would’ve likely failed at the box office) to be canceled. The President even jumped into the fray with his passive/aggressive “it was a mistake” comment. Sony has now made The Interview available, but that doesn’t mean that North Korea will go away quietly. They still need to be watched whether the President likes it or not.

Lets not forget Iraq, ISIS, and Syria. Syria is most definitely a bad actor. Not long ago, most if not all the world wanted them kept at a 30 ft distance. Now, because of the US, they are a strategic ally in the fight against ISIS. Question is, how good of an ally are they? I’d say that Syria needs to be treated with extreme caution. But then, I’m not the Resident Duffer In Chief. 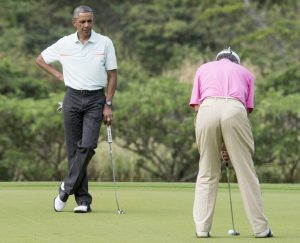 Nope, this President seems to be practicing the early stages of Hillary’s “therapy” style of foreign policy. So much so, that we’ve told the world that Cuba is now on Santa Obama’s “nice” list.  You know who benefits from all this goodwill and graciousness toward Cuba by our military’s Commander in Chief?

How about Venezuela? They’ve been an ally of Cuba’s for years.  Cuba also has a nice cozy relationship with Iran and is wanting Russia to become more of an ally than they already are. And let’s not forget their arms transactions with North Korea.  This latest “gift” from Santa Obama involves us with a country who is aligned with many adversaries of the US, and our President compounds his golfing “statecraft” by releasing several VERY bad guys from Guantanamo Bay.

Mr. President, I know you really really think you deserve this vacation of yours.  I know that your golf game needs some significant fine-tuning, and all this foreign policy stuff is just headache inducing, but you know what? This world is NOT more peaceful than it was prior to 9/11. Like it or not, the reality we all face is a world that has become more volatile and dangerous; and you have played a role in getting America to this point. The US role in Afghanistan isn’t quite finished, no matter what you say. There are still troops in that country and they will be there for some time.  Before you wave your putter and send our military to a new hot spot or to a reactivated old one such as Iraq, you need to remember something. Playing Santa to the worlds dictators and then running off to the golf course is not the responsible “gift” our military or our country needs.