The president took the joke “Narcissist in Chief” to a whole new level when his campaign unveiled his new, improved version of the American flag — only $35 at his campaign store! Rather than displaying the stars in Old Glory’s stars and stripes, he replaced it with his campaign logo:

As if the flaunting of his massive ego by violating the flag code wasn’t bad enough, then there was this: the uncanny resemblance to the grisly scene at the Benghazi consulate, where smears of blood were left on the walls. 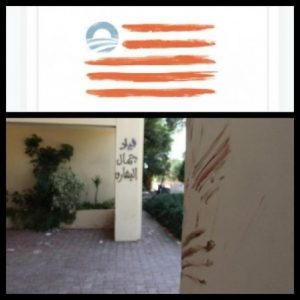 People were understandably outraged over this: at Obama’s narcissism, at his violating the flag code, at his poor taste in selling a flag so similar to the blood smears at Benghazi. The flag not only reminded people that we have a president who finds himself so important, he can make his own version of the American flag, but it also reminded them of one of the worst foreign policy disasters in recent history. It was one of the most monumentally stupid things the Obama campaign could have done. And they knew it. So now, when you go to purchase an Obama flag, this is the screen that you see:

Hat Tip: The Other McCain