Tourist Jennifer Foster of Florence, AZ was sightseeing in Times Square with her husband on a cold November 14th evening when they saw a shoeless man, apparently homeless, panhandling for change. She says, “Right when I was about to approach, one of your officers came up behind him. The officer said, ‘I have these size 12 boots for you, they are all-weather. Let’s put them on and take care of you.’ The officer squatted down on the ground and proceeded to put socks and the new boots on this man…” 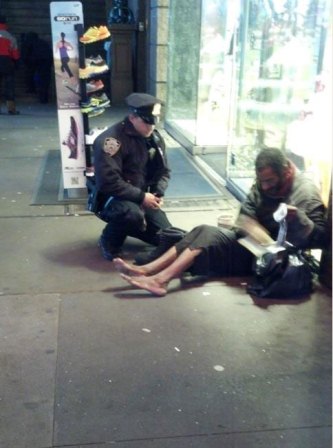 Officer DePrimo, 25, who joined the department in 2010 and lives with his parents on Long Island, was shocked at the attention. He was not warned before the photo went online; the department had not learned which officer was in the picture until hours later.

The officer, normally assigned to the Sixth Precinct in the West Village, readily recalled the encounter. “It was freezing out and you could see the blisters on the man’s feet,” he said in an interview. “I had two pairs of socks and I was still cold.” They started talking; he found out the man’s shoe size: 12.

As the man walked slowly down Seventh Avenue on his heels, Officer DePrimo went into a Skechers shoe store at about 9:30 p.m. “We were just kind of shocked,” said Jose Cano, 28, a manager working at the store that night. “Most of us are New Yorkers and we just kind of pass by that kind of thing. Especially in this neighborhood.”

Mr. Cano volunteered to give the officer his employee discount to bring down the regular $100 price of the all-weather boots to a little more than $75. The officer has kept the receipt in his vest since then, he said, “to remind me that sometimes people have it worse.”

As for the man he helped, Officer DePrimo never got his name, and he could not be immediately located on Wednesday. “He was the most polite gentleman I had met,” the officer said, adding that the man’s face lit up at the sight of the boots. Officer DePrimo offered him a cup of coffee, but “as soon as the boots were on him, he went on his way, and I just went back to my post.”

Wow. No. Not my usual vapid “new shoes” post. Here’s a video of both Officer DePrimo and Jennifer Foster this morning on the Today Show:

Officer DePrimo was uncommonly selfless and kind that night when he thought no was watching, and now, the world knows what he did. Remarkably, the homeless man was not the only one who received a gift that night.