by Catherine Wilkinson in military 8 Comments

“The two Marines had about five seconds left to live. It took maybe another two seconds for them to present their weapons, take aim, and open up. By this time the truck was half-way through the barriers and gaining speed the whole time. Here, the recording shows a number of Iraqi police, some of whom had fired their AKs, now scattering like the normal and rational men they were—some running right past the Marines. They had three seconds left to live.

For about two seconds more, the recording shows the Marines’ weapons firing non-stop…the truck’s windshield exploding into shards of glass as their rounds take it apart and tore in to the body of the son-of-a-bitch who is trying to get past them to kill their brothers—American and Iraqi—bedded down in the barracks totally unaware of the fact that their lives at that moment depended entirely on two Marines standing their ground. If they had been aware, they would have know they were safe…because 2 Marines stood between them and a crazed suicide bomber.” — from Marine Lt. Gen. John Kelly’s 2010 eulogy of two American sons who died in combat just four days following the death of his own son in combat.

Here’s the complete transcript of General John Kelly’s speech. Go read it. All of it. You won’t be sorry.

We have all heard it said that you can judge a man’s character by what he does when no one is looking. 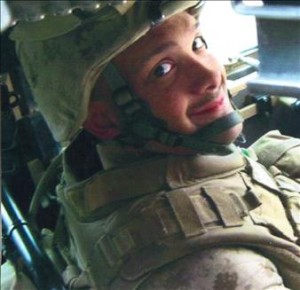 No one was watching when Corporal Jonathan Yale and Lance Corporal Jordan Haerter stood their ground and followed orders.  They didn’t run, then lie about it later, or make excuses.  They didn’t have time to say a prayer or think of their loved ones.  They did their duty as Marines, fulfilling their oath of duty, and they did it perfectly and without hesitation.

We don’t even ask that Obama and his minions lay down their lives.  We only ask that they honor this country and the Constitution on which it was founded, tell the truth to the people who put them in office, to protect our freedoms, and stop pushing agendas that cripple our economy and liberty.  Obama has violated his oath of duty.  Repeatedly.    When no one was watching.

We didn’t ask that these two remarkable young men give their lives to protect others, including the Iraqis.    We probably would have understood and even forgiven the natural human tendency to run (as many did) when faced with certain death.  They did not.  Character is what you do when no one is watching.

What we do ask is that the government stop trying to subvert the Constitution,  stop taking away our rights and freedoms,  stop lying, cheating, and wasting tax dollars, while exposing this country to ever increasing dangers.  To stop coddling the enemy,  stop interfering with the education of our children, stop trying to disarm law-abiding citizens, and stop trying to control every aspect of our lives, while taking our tax dollars to fund your nefarious efforts.  The list of things we ask of this government is long and it filled with things we want them to STOP DOING.  And stop doing it covertly and when no one is watching.

We legitimately ask this of our President and our government….but they continue to focus with increasing intensity, on protecting themselves while advancing anti-American and anti-freedom agendas and lining their own pockets, Soviet-style.

We didn’t ask anything of Corporal Jonathan Yale and Lance Corporal Jordan Haerter.  They were following orders, following the orders of the Sergeant, following the code of the USMC, following their own instantaneous and deeply embedded sense of what protecting their fellow Marines (and Iraqis) means…and the actions needed to be done to do it.    No one was watching.  But there it was….Character.

In the meantime, the whole Obama/Liberal/Progressive political machine works feverishly, covertly, and illegally…..lying to citizens, abusing Constitutional rights and privileges…all the while, vehemently denying the overwhelming evidence they are corrupt, greedy, and deeply flawed leaders.  Character is what you do when no one is watching.

We ARE watching.  And we clearly see what kind of character they all have.  Think of what we can’t see.