Moderate Islam, Where Are You?

Moderate Islam, Where Are You?

After the brutal execution of James Foley this week, there was no massive demonstration against the barbarism of ISIS by other Muslims.  There was no organized group marching for justice for his death, as there was for Michael Brown.  Foley’s murder did get one brave tweet from the Syrian rebels of Kafranbel, but that was pretty much it.

However, plenty of Muslims did take to Twitter to address the murder.  However, many were in support of it. 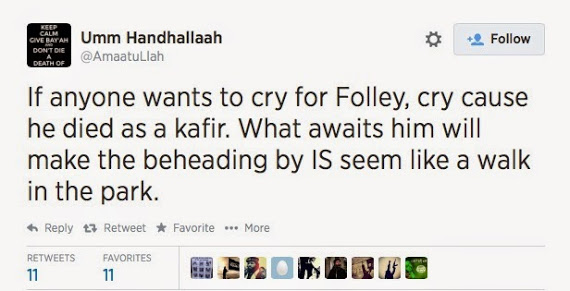 There are more tweets here, many from “private” accounts, hence the snapshots.

I am left asking where, oh where, are these members of the “Religion of Peace” that politicians and other leaders insist are out there?  How many times have we heard in speeches that “Islam is a religion of peace” and that “these acts do not represent all Muslims”?  We’ve all heard it.  It’s standard fare to make sure that no one gets offended by words after atrocities have been committed in the name of Islam.

President Obama, in his five and a half minute statement before tee time at the club, made those same points AGAIN.

So ISIL speaks for no religion. Their victims are overwhelmingly Muslim, and no faith teaches people to massacre innocents. No just god would stand for what they did yesterday and what they do every single day.

Uh, you know what?  I am more concerned about how ISIS interprets Islam than how President Obama interprets Islam.  Because only one of them right now is sawing people’s heads off because they believe it fits perfectly how Islam should be practiced.  It doesn’t matter that only a “small” sliver of practicing Muslims want to cut people’s heads off for being infidels.  THEY STILL WANT TO CUT PEOPLE’S HEADS OFF.  And we are all targets.

Where are you, moderate Muslims?  Ever since 9/11, we have been told you are out there: tolerant, friendly, open-minded, not wanting to kill the infidel, but coexist peacefully.  A few pop up every now and then on cable news, but there is no Muslim movement that preaches that tolerance and peace.  If there was, they would be front and center of every news station in the country, with their PR people in force, to give statements condemning these barbaric acts every time they occur.  So, why don’t we hear from them?  It can only be one of two reasons:
1) They don’t exist, or
2) They know that speaking out will paint a target on them, so they remain personally tolerant and friendly to the non-Muslims they know, but remain collectively silent cowards.

After all these years, I’m no longer sure which reason is true.

This quote from George Orwell about Hitler and Nazi Germany is sounding eerily prescient when applied to ISIS and other Islamic terror groups.

Also he (Hitler) has grasped the falsity of the hedonistic attitude to life. Nearly all western thought since the last war, certainly all “progressive” thought, has assumed tacitly that human beings desire nothing beyond ease, security and avoidance of pain. In such a view of life there is no room, for instance, for patriotism and military virtues. The Socialist who finds his children playing with soldiers is usually upset, but he is never able to think of a substitute for the tin soldiers; tin pacifists somehow won’t do. Hitler, because in his own joyless mind he feels it with exceptional strength, knows that human beings don’t only want comfort, safety, short working-hours, hygiene, birth-control and, in general, common sense; they also, at least intermittently, want struggle and self-sacrifice, not to mention drums, flags and loyalty-parades. However they may be as economic theories, Fascism and Nazism are psychologically far sounder than any hedonistic conception of life. The same is probably true of Stalin’s militarised version of Socialism. All three of the great dictators have enhanced their power by imposing intolerable burdens on their peoples. Whereas Socialism, and even capitalism in a more grudging way, have said to people “I offer you a good time,” Hitler has said to them “I offer you struggle, danger and death,” and as a result a whole nation flings itself at his feet. Perhaps later on they will get sick of it and change their minds, as at the end of the last war. After a few years of slaughter and starvation “Greatest happiness of the greatest number” is a good slogan, but at this moment “Better an end with horror than a horror without end” is a winner. Now that we are fighting against the man who coined it, we ought not to underrate its emotional appeal.

ISIS fights and kills because they believe Allah will reward them for doing so. And they will not be dissuaded. Moderate Muslims, what say you… if you are even there?