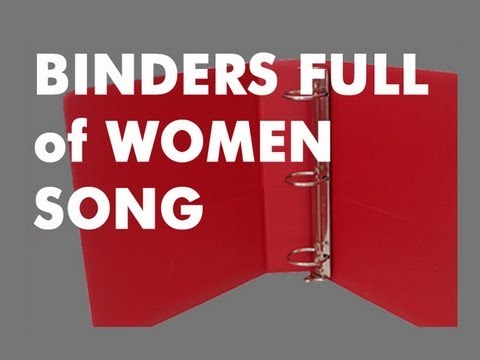 So the libs are working overtime to make Mitt Romney’s “Binders full of women” comment – referring to a question about what the candidates would do to address gender inequality in the workplace – the “Big Bird” of the 2nd Debate. It’s pretty funny really. In less than 24 hours, “Binders full of Women” already has it’s own Facebook and Tumblr pages and a Twitter account with over 30,000 followers.

It’s also the featured Song of the Day, the satire version, at HuffPo:


Song of the Day: Binders Full of Women

Here’s the real Mitt Romney’s comment from the debate last night that inspired it all:

Those “binders full of women” actually came from a coalition called Massachusetts Government Appointments Project, or MassGAP, that formed in August 2002 to address the shortage of women in high-ranking government positions. Their role was to assemble groups of applicants, taking several months to reach out to women’s organizations around the state, and preparing to present potential hires to whichever candidate won the election.

“We contacted both candidates before the final election,” said Liz Levin, who was chairman of MassGAP until 2010. “This was an effort that we put our hearts in. We wanted to make sure that people knew how many good, qualified, terrific ladies there were.”

Then Governor Romney wanted to work with this bi-partisan group and he appointed Kerry Healey, the incoming lieutenant governor, to be the liaison to MassGAP. The group presented several hundred applicants to Healey, (an Obama supporter by the way) and the rest is history.

And yes, there really were binders!