Next post
NBA Players Get To Virtue Signal On Jerseys 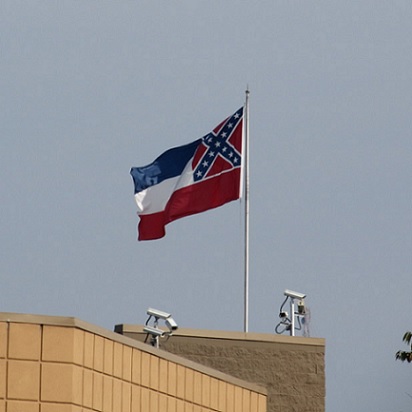 The votes weren’t close. On Sunday, the Mississippi state House and Senate both voted to remove the current state flag in favor of a redesigned one.

This made national news, of course, because Mississippi was the last state to still have the Confederate battle flag embedded in the state flag. The state House passed the bill 91-23, and the state Senate followed and passed the bill with a 37-14 vote.

Each chamber had broad bipartisan support for the historic decision. Republican Gov. Tate Reeves has said he will sign the bill, and the state flag will lose its official status as soon as he does. That could happen in the next few days.”

Mississippi has faced mounting pressure to change its flag during the past month amid international protests against racial injustice in the United States.”

After the vote, legislators embraced each other. Even those on the opposite side of the issue also hugged as an emotional day of debate drew to a close.”

A commission is to design a new flag that cannot include the Confederate symbol and that must have the words “In God We Trust.” Voters will be asked to approve the new design in the Nov. 3 election. If they reject it, the commission will set a different design using the same guidelines, and that would be sent to voters later.”

Yes, this is a highly accelerated timeline, seeing as the bill was introduced on Saturday and voted on late Sunday. So yes, this particular bill was sent speeding through both houses of the legislature. In reality, this debate has been ongoing for a long time.

The current flag, featuring red, white and blue stripes with the Confederate battle emblem in the corner, was adopted in February 1894, according to the Mississippi Historical Society.

Other attempts to change the flag have fallen short over the years, including a 2001 public referendum in which Mississippi voters were given a chance to change the flag. The proposal failed, as 64 percent voted against a redesign.

The Mississippi Historical Society also notes that legal challenges to the flag have failed in the past, as the Mississippi Supreme Court ruled in 2000 that it was the job of the legislative and executive branches to change the flag, not theirs. And now, they have moved to do so.

As the bill states, even if the people of Mississippi reject the redesign in November that the commission comes up with, they will simply be voting again and again until a flag that does not have the Confederate battle flag emblem on it is accepted. Once Governor Reeves signs the bill, the current state flag comes down, and goes into the history books.

Everyone is entitled to their own opinions about this. Even though the bill was definitely accelerated by current events, this was likely to happen sooner rather than later. Mississippi was the last state with the Confederate battle flag still on it. Now, there are fair arguments to have about the Confederate battle flag, i.e. representing Southern heritage versus representing the army defending slavery. But does it still need to be on the state flag of Mississippi? Rightly, the courts have ruled that this was an issue for the people’s representatives to take up. And they have. This was a bipartisan vote, and a highly emotional one, by all reports.

Now, reasonable people can debate whether this was surrendering to the mob or not. The fact that the vote was so lopsided is telling, and it does have a vibe of supporters striking while the iron was hot. Those who had been pushing the flag change for years knew that momentum was on their side. However, this seems to be a similar pattern to how Georgia finally changed their flag in 2004 – by presenting people with two options to choose from after a period of time with a “compromise” flag.

Flags are different than statues. Statues and monuments are meant to represent history. A flag is meant to represent the present day – which is why the United States flag has 50 stars, not just 13. I would rather fight to defend statues and monuments from being torn down by mob rule and anarchy, than fight over an actual legislative effort to redesign the Mississippi state flag. This bill might have been rushed, and voted on and passed due to the passion of the moment, but these are the duly elected representatives of the people of Mississippi who made this decision – not a court, and not the mob. Now, the decision on what kind of state flag will be accepted will truly be in the hands of the voters of Mississippi.