Previous post
Adam Schiff: No Coronavirus Deaths If Trump Had Been Impeached

Next post
Iran Arms Embargo Must Be Extended, Pompeo Says 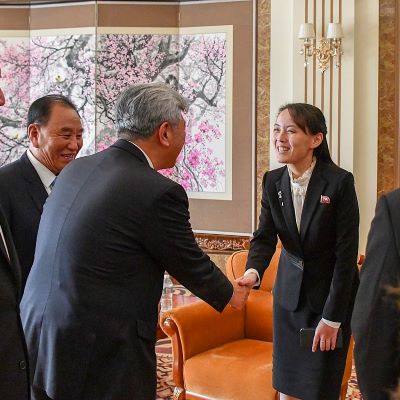 With rumors about North Korean dictator Kim Jong Un’s deteriorating health and maybe even demise, the world’s eyes are turning to his younger sister Kim Yo Jong as a possible successor to the throne of the Hermit Kingdom.

But who is Kim Yo Jong? Why is this reclusive young woman all of a sudden considered a possible replacement for her older brother, even though North Korea has always been a patriarchal society? What is it about this enigmatic 30-something female that has the world talking?

Yo Jong first burst onto the world’s radar during the 2018 Winter Olympics, when this charming bag of psych0 famously gave Vice President Mike Pence the evil side-eye, while the proglodytes collectively climaxed over the undiplomatic moment. Because Pence is ostensibly anti-gay or something and also ORANGEMANBAD and CONVERSIONTHERAPY!

The year before the infamous death stare, Yo Jong was designated by the Treasury Department pursuant to Executive Order 13687 for egregious human rights abuses.

Yo Jong is the Vice Director of the Workers’ Party of Korea Propaganda and Agitation Department (PAD), and the PAD had been designated pursuant to EO 13722 as a component of the Government of North Korea. It is North Korea’s primary agency responsible for both newspaper and broadcast censorship, among other things.

But Yo Jong is more than just a censor and propagandist. She’s part of a brutal regime, that despite CNN’s masturbatory fantasy about her “diplomatic” nature, makes her a ruthless, authoritarian despot.

And this regime is the definition of tyranny.

According to a Holocaust survivor, North Korean prisons are actually worse than Nazi concentration camps were during the Holocaust. In a 124-page report, the International Bar Association, documents in grisly detail the horrifying abuses the North Korean regime continues to commit against political prisoners.

Persons who are found by the SSD to have engaged in political crimes are sent without any meaningful trial or formal proceedings to these political prison camps. …Prisoners also include those who have been exposed to allegedly subversive, outside influences.

With respect to the DPRK political prison camps specifically, the UN Commission of Inquiry found that prisoners had been subjected to “deliberate starvation, forced lab[or], executions, torture, rape and the denial of reproductive rights enforced through punishment, forced abortion, and infanticide.

This is the kind of regime in which Yo Jong thrives. This is the kind of regime that she protects by overseeing its censorship and propaganda programs. And even while the people of North Korea starve and turn to cannibalism, searching out homeless children begging for food on the streets and eating them to survive, and Yo Jong’s brother feasts on caviar and “disappears” any pretty young girl who dares to defy the order to become a sex slave, Yo Jong continues her propaganda campaign to promote Jong Un as a heroic leader.

And dog forbid anyone challenges Yo Jong’s propaganda efforts! Entire families are punished if just one person is suspected of dissent. According to a report by the Committee on Human Rights in North Korea, indoctrination begins from an early age by a child’s parents to ensure that no offense against the country’s leaders are ever committed in order to protect the family. As children grow, the North Korean schools inundate them with propaganda, and later the workplace forces increased productivity to support the state and the leaders of that miserable, tyrannical shithole.

This is the brainwashing and indoctrination in which Yo Jong engages and for which she was designated a human rights abuser.

And although Yo Jong has generally kept a low profile, she did rear her serpentine head this year to ridicule South Korea as a frightened “barking dog” for opposing the regime’s live-fire military exercise, even as her propaganda machine squeals like a rabid bitch that the US joint military exercises with South Korea are “provocative” (and the Trump administration foolishly postponed them as an act of “good will” toward the north).

Ultimately, there will be a power struggle as the regime tries to name Kim’s successor, and the military will play a key role, according to RMIT Professor Joseph Siracusa in an interview with Sky News. It is entirely possible that Yo Jong will hold down the leadership fort until another male heir is old enough or otherwise ready to take over as the next Dear Leader as well, Siracusa says.

Although we do not know whether Yo Jong will become the Dictator-in-Chief, given the Hermit Kingdom’s generally patriarchal society, if you imagine that having a woman at the helm will somehow improve the situation for the North Korean people, I would urge you to think again.

This creature is vicious, cunning, and will likely be as murderous or worse than that flabby bag of gelatinous toxic waste that has been running North Korea for the past nine years.