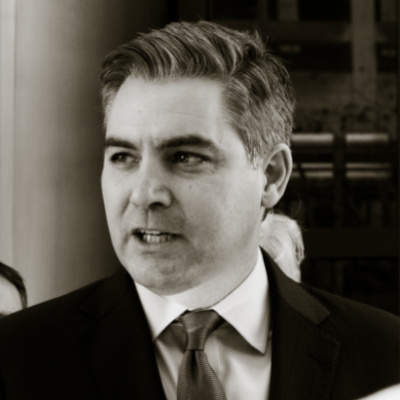 President Donald Trump joined Texas Governor Greg Abbott to tour the Southern Border at the Rio Grand Valley (RGV) sector. At the press conference after, CNN’s Jim Acosta ignored the chaos at the border to ask Trump to apologize for the January 6, 2020 riot.

Kamala Harris did a touch and go at the El Paso International Airport last week on her way to her California home. In typical Harris style, she checked a box, looked for root causes at the terminal Whataburger (can’t blame her for that one), waved and left.

Trump and Abbott were in Pharr, Texas at an unfinished section of the border in the Rio Grand Valley. To underscore the chaos at the border, in the month of May, the Pharr Police Department requested the assistance of the RGV Border Agents in a human smuggling event that led to the arrest of 97 persons.

The megalomaniacal hairdo known as Jim Acosta wasn’t interested in human trafficking. He was only interested in gigging Donald Trump again. Going after Donald Trump is the Specialty of the House at CNN, and their ratings plummet without Trump.

Since Jim Acosta is so philosophically myopic, he couldn’t be bothered to worry about the two year old boy, found at the border on the Mexican side yesterday, abandoned. Myopic, talking hairdos are only interested in scoring points and getting clicks. So, Jim Acosta asked Trump if he would apologize for January 6 and then got butthurt when he got booed.

He got booed. Boo hoo.

Jim Acosta got to yell a question at Trump today like old times… except CNN has 75% less viewers now and his career is hanging by threads.

But, the megalomaniacal hairdo of thee seething hatred had this to say:

CNN’s Jim Acosta posted video of mostly mask-less Trump supporters shouting “CNN sucks!” at him as he tried to cover a political rally Wednesday. Though the 49-year-old White House correspondent said that sort of behavior is the norm at the president’s rallies, that doesn’t make it normal.

“This happens at just about every Trump rally,” he tweeted. “I’ve covered five presidential campaigns… long enough to know this isn’t normal.”

According to Acosta, he still see shades of humanity when he scans the shouting mobs around him.

“Sometimes I’ll scan the crowd, not for the folks who are chanting but for the people who look back at me silently, letting me know they know it’s wrong,” he said.

Oh my stars and garters, Acosta still sees “shades of humanity” at Trump Rallies. How is that even possible? Read that with dripping sarcasm.

Here’s a radical thought: Report on the Fetanyl seized at the border. From the Olean Herald Times last month:

Texas DPS also reported an 800% increase in the amount of fentanyl its officers confiscated after apprehending drug smugglers this April compared to last April.

“I don’t know if Secretary [Alejandro] Mayorkas and the Biden administration either don’t have a clue what’s going on or they are purposefully misleading their fellow Americans,” Abbott told Fox News.

The amount of fentanyl Texas DPS confiscated in April “was enough fentanyl coming across the border to kill every single person in the state of New York,” Abbott said.

That should terrify people more than the idea of going maskless.

Maybe, just maybe, if Jim Acosta reported real news instead of fake news, he wouldn’t get booed. And, by the way, both Acosta and CNN suck.