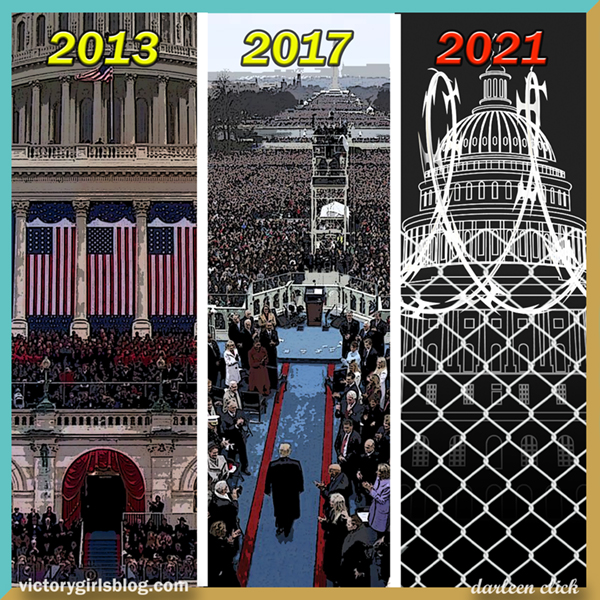 With all the wall-to-wall media and celebrity hype of Joe “Hairy Legs” Biden’s inauguration, in a capitol surrounded by enough troops and razor wire to make Kim Jong-Un jealous, the more rational Americans are going to sit this one out. Why not take a break from a forced celebration of mediocrity in service of authoritarianism until it becomes law that we must attend?

There isn’t much more I can add here to the saga of the walking empty suit that is Joe Biden. A good o’slacker who has faked his way through life starting at such an early age, one wonders if there ever was an actual Joe Biden. He is this public shell of Come on, man! faux folksiness and weird embarrassing stories but loses his temper at any challenge. His creepiness is legend, from stories of kids on his lap or stroking his leg hair and there are enough pictures of him fondling and kissing young girls in public to realize he knows exactly what he’s doing. The power of being an elected Democrat gives him the license to behave in such a manner. There is never a #MeToo reckoning for people like Biden, anymore than there was for Ted Kennedy or Chris Dodd or even Eric “Bang Bang Fang Fang” Swalwell.

So here we are. At inauguration time. For President of the United States of America. But with a man barely holding on to all the cognitive ability of a potted plant, a grasping, shallow wife eager to play the Edith Wilson role, “Dr.” Jill being matched only in cynical whorishness by Commie-la Harris (please dear lord let someone on the WH staff be wired to record the imminent, epic cat fights between those two!) and an incoming body of Cabinet staff that confirms this is Obama’s 3rd term with an extra helping of Californication.

Can’t you just feel all that the unity and healing? Heh.

Not that I think CCP-puppet Biden makes these appointments himself. I’m sure Obama has a change or two of clothes and his own personal chef at the White House already.

I mean, who more than Barack is bitter enough to rub salt into the wounds of the hoi polloi by appointing to Assistant Secretary of Health a trans-identified male who forced nursing homes to take covid patients (ala Cuomo) while he snuck his own mother out and put her up at a luxury hotel? Only Barry could convince the potted plant to tout his administration would be guided by #SCIENCE!!!

And for the love of God, the public acts of onanism over Biden cannot — well, should not — be real!!

About the way Joe Biden takes off his sport coat? https://t.co/WmouH1vIWz

CNN's David Chalian says that the side lights on the National Mall's reflecting pool are like "extensions of Joe Biden's arms embracing America." pic.twitter.com/G88C8UCN3C

Excuse me, not only would I be telling America to knee that sucker in the groin and scream rape, but what brain-eating drugs is this guy taking to rhapsodize over a creepy, Potemkin National Mall where citizens are no longer allowed? Certainly, bath salts aren’t a thing anymore, right?

So, go ahead and watch the fake inauguration ceremony in a militarized National Mall based on an election so dirty Boss Tweed or Chicago Mayor Richard J. Daley would cry in delight from Hell. Do you understand that even as violent riots in DC were aimed at Trump’s inauguration, citizens were welcomed to participate in their Capitol? This Democrat-demanded version of East Berlin is obscene.

The new Faker In Chief of the United States is not my president. He stands, a CCP-purchased puppet fronting for radical Leftists ready to fundamentally change America into Not-America. Real resistance begins. Make your choice.

Thanks to Sarah Hoyt for coining the FICUS acronym.