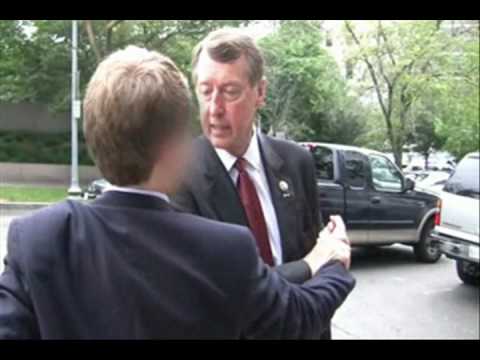 And the whole attack was caught on camera. This assbag assaulted a student — one of his constituents — simply because the student asked if Etheridge supported “the Obama agenda”. From Big Government, here’s the video:

Dumb, dumb, dumb move. This idiot assaulted a student — seemingly one of his constituents — for asking him a question. He’s up for reelection in a district that apparently swings Republican, and he’s up against a credible opponent, Renee Ellmers. According to her bio, she’s a nurse who (obviously) has worked in the health care industry and served as the President Elect of her town’s Chamber of Commerce, in addition to several other volunteer activities. She reminds me a little of Sarah Palin in that regard — a mom who got involved in local politics because she wanted to make a small difference for her children. She opposes Obamacare and the bailouts, is pro-life, and wants to actually enforce our immigration laws (GASP!!).

Against this kind of opponent in an anti-incumbent year, it doesn’t exactly seem too brainy to be assaulting kids on the street. But then, it’s typical for these elitist liberal Democrats to react in a hostile fashion. They don’t like for us ignorant rubes (also known as “constituents”) to question them. We should know that they know better. I mean, jeez, how dare someone ask politicians to be held accountable for their actions? How dare politicians have to answer questions??

North Carolinians, take note. When it comes time to cast your votes this November, just remember this. Do you really want a congressman who reacts to a reasonable question by assaulting the kid who asked it?