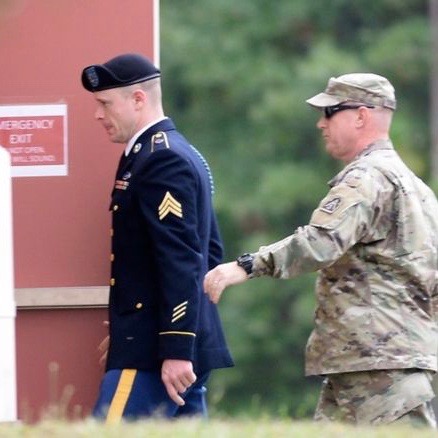 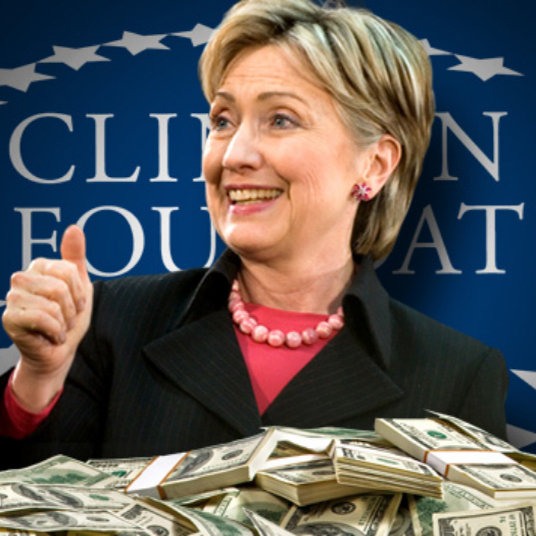 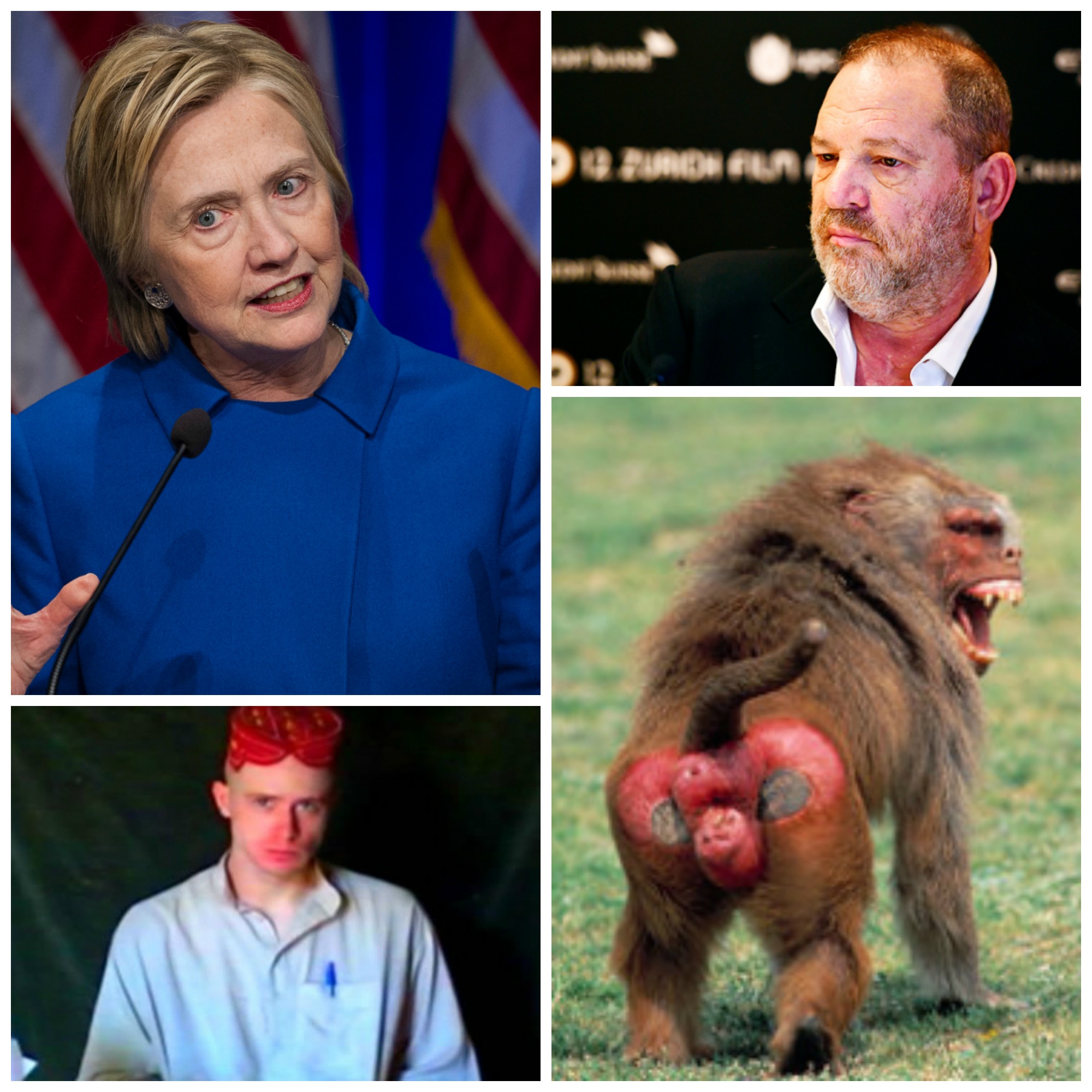 Hillary Clinton, Bowe Bergdahl and Harvey Weinstein have all been in the news lately for vastly different reasons, but they all have the same problem. The baboon’s backside is only in the title because Hillary, Bowe and Harvey made me think of a baboon’s backside. HIllary , Harvey and Bowe are the trifecta of spoiled, entitled jerkfaces (a technical term) with the inability to accept responsibility for their own actions. Like a baboon’s backside they are out there. 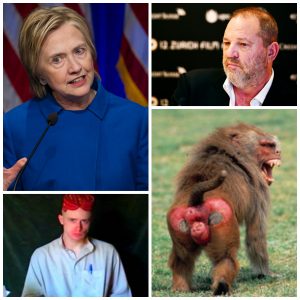 Whatever trouble they are in, whatever crimes they have committed is not their fault. It couldn’t possibly be there fault. What are their excuses?

Hillary Clinton wrote a hilariously titled book “What Happened”. She is currently in England. Last night, according to Buzzfeed:

According to the Press Association, she told Norton: “I was running down the stairs in heels with a cup of coffee in hand, I was talking over my shoulder and my heel caught and I fell backwards.

“I tried to get up and it really hurt. I’ve broken my toe. I’ve received excellent care from your excellent health service.”

I fall a lot. Just call me Grace. However, when I fall backwards in heels, as you do, I don’t generally break my toe. Hillary, are you telling the truth? Everyone stop laughing. She probably has told the truth once, somewhere. Anyhoo. Here is a quote on why she lost the election from NDTV.com:

“The only way we’ll get sexism out of politics is to get many more women into politics,” she said to rapturous applause while promoting her book “What Happened”.

Women, she said, were more heavily judged and criticised due to sexism – from their physical appearance to their beliefs – and generally disliked in positions of power rather than in supporting roles, she told the Cheltenham Literature Festival.

The former First Lady said her political loss had left her stunned and admitted at times it was hard to get out of bed but long walks in the woods, reading mystery novels, playing with her dogs and yoga helped her to deal with her “grief”.

“Everybody gets knocked down. What matters obviously is whether you get yourself back up and keep going,” she told an audience of thousands.

“As a person I’m ok, as an American I’m worried,” she said, citing Trump’s interactions with North Korea and withdrawal from the Paris climate agreement as causes for concern.

Clinton admitted she struggled to attend Trump’s presidential inauguration in January but was supported by her husband, former President Bill Clinton.

I would love to see the first woman President of the United States, but not Hillary. Absurd question: Are we also going to have to torture ourselves to death over the first Jewish, Sikh, Chinese or ethnic Albanian President? Just asking.

Hillary, you sucked as a candidate. You were too controlled, you didn’t campaign where you should have and you are not likeable. At all.

Harvey Weinstein is not responsible for what he did to dozens of women, that we know about so far, according to Harvey. This quote is from the “Huffington Post” quoting the “New York Times”:

In a statement to the New York Times, Weinstein stated that “I came of age in the 60′s and 70′s, when all the rules about behavior and workplaces were different. That was the culture then.”

Harvey, this is how you take responsibility. “I, Harvey Weinstein, am a nasty pig of a man. I used my position of power to denigrate, assault and (allegedly) rape young women. I accept full responsibility. I am going to withdraw from society until such time as my cases are adjudicated.” Full stop. Get it.

Bowe Bergdahl is a young man who should have never even been allowed to drive by an Army base. The Army recruiters should have dropped kicked him out of the recruiting station. He was kicked out of the Coast Guard after 26 days for psychological reasons. None of this is the fault of Bowe Bergdahl. The Daily Wire explains:

According to government documents released on Wednesday, deserter Bowe Bergdahl stated that he left his post in Afghanistan as an act of “self-sacrifice.”

“So, the idea was to — it was— literally, it was a sacrificial — it was a self-sacrifice thing,” he explained.

Apparently, Army Sgt. Bergdahl didn’t like the way things were being handled by his commanders, so he decided to take matters in his own hands. “Bergdahl told a general who investigated the case that he hoped to cause an alarm by leaving his post, then walk to a larger base in Afghanistan so he could have an audience with a top commander,” reports Business Insider.

Oh, Bowe, how heroic of you to sacrifice yourself. Not. And, ABC bought an exclusive interview in which Bergdahl aggrandized himself again:

“We may as well go back to kangaroo courts and lynch mobs that got what they wanted,” Bergdahl says. “The people who want to hang me — you’re never going to convince those people.”

Bowe you have had three years of due process and fine representation. Kangaroo courts, lynch mobs, and hanging. You egotistical weeny boy. I don’t want to see you hung. That’s way too good for you. I want you breaking rocks and straightening nails in the hot sun inside Stony Lonesome for the rest of your unnatural life.

Post this collage on your fridge at home as a warning. Every day before you go to work, school or the grocery store take a look at the four pictures in the collage. Remember, take responsibility for your own actions. Don’t be like Hillary Clinton, Bowe Bergdahl, Harvey Weinstein or a baboon’s backside. This has been a public service from Victory Girls.