Next post
Bristol Palin to appear on Dancing With The Stars? 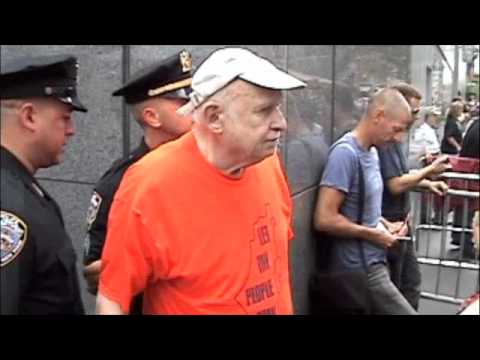 The running meme on the Left has been that Americans who oppose the Ground Zero mosque are bigoted, anti-Islamic hatemongers. No attention is paid to the hate often present on the left, by the same activists who are usually the first to claim racism, bigotry, or violence. Interesting to see is their almost lockstep defense of Muslims and the Ground Zero mosque; meanwhile, they completely ignore the anti-Semitism that is so commonplace among Islamofascists. (Take, for example, the appalling practice of indoctrinating Muslim children to hate Jews.) At a rally attended by people who both supported and opposed the Ground Zero mosque, though, one activist took the anti-Semitism to a disturbing new level.

When confronted by the 82-year-old Holocaust survivor, the Ground Zero supporter went ballistic — swearing and tossing anti-Semitic insults. He even shouted that the man didn’t learn his lesson in the Holocaust. Here is the appalling footage (caution for VERY strong language):

Interestingly, according to this leftist nutjob, opposing the Ground Zero mosque is the same thing as murdering millions of innocent people because of their religion. Ironic, considering that this is exactly what Islamofascists do in the name of jihad? Anyone who isn’t a Muslim is an infidel and should be brutally murdered. Jihad against the Jews is especially widespread among Islamic terrorists.

The leader of the Ground Zero mosque, Imam Rauf, is no moderate Muslim either. He’s an advocate for Sharia law in America, even calling America a “Sharia complaint state”. The majority of Americans have plenty of reasons to oppose the Ground Zero mosque. Most of the people who oppose it understand that Muslims have the right to build a mosque wherever they want; they just wish that they would have the tact and sensitivity not to build a mosque so close to the spot where almost 3,000 Americans were murdered by violent Islamic jihadists.

It’s a disgusting example of the intolerance and the hate-filled vitriol present on the left. Yet for some reason, conservatives are the ones who are labeled as hateful, intolerant bigots. Ah, yes, those peaceful, tolerant, non-violent lefties! Yet the same thing seems to happen so often — a lefty goes absolutely insane anytime someone has the gall to disagree with them. This man in particular went so far as to hurl expletives at an 82-year-old Holocaust survivor just peacefully expressing his own opinion. It’s despicable. How much lower can these so-called liberals sink?