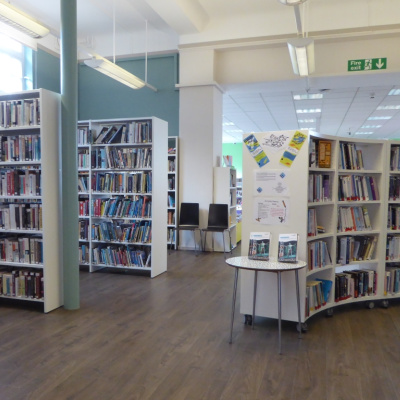 Jamestown, Michigan is facing all kinds of drama and anger over a library. The town is tearing itself apart over a memoir titled “Gender Queer”. The inclusive local library is being beset by Christo-Fascists who accuse the library of grooming children. There is no common sense in this town.

The Huffington Post caught our attention with this article: “Outrage Over A Single Book is Shutting Down This Town’s Library”

The Patmos Library in Jamestown, Michigan, was Chavala Ymker’s refuge for years.

“We didn’t have the internet, and the library was the only place I had access to books and a space outside of my home,” said Ymker, 23, who was home-schooled while growing up in the small town.

But within a couple of years, that place of escape will probably not exist.

Last year, residents of Jamestown, a township made up of nearly 10,000 people, voted to defund the public library following a push from conservatives to remove the book “Gender Queer” by Maia Kobabe from shelves.

Personally, I think that TicToK is far more dangerous than your local library, but I do see the library problem. The problem is not the library as much as it is the agenda of the librarians. The Left will tell you that Christo-Fascists see a groomer and a revolutionary behind every column in the library, but according to this New York Post article, the agenda is there:

“Librarians see themselves on the front lines on what it takes to bring revolution to the US. You need soldiers in the revolution so they are teaching kids to be little antifa activists who hate their own country and will act as a collective to bring about change.”

Many activists point to the American Library Association (ALA), the oldest and largest library organization in the world, as the driving force behind what they say is too radical an agenda.

The newly-elected head of the ALA — a self-described “Marxist lesbian” named Emily Drabinski — said she rose through the ranks the old-school way, from “looseleaf legal filer to library director.” But her mission is deadly serious.

“So many of us find ourselves at the ends of our worlds,” Drabinski said during her campaign to become ALA president. “The consequences of decades of unchecked climate change, class war, white supremacy, and imperialism have led us here. If we want a world that includes public goods like the library, we must organize our collective power and wield it. The American Library Association offers us a set of tools that can harness our energies and build those capacities.”

She’s not scary at all. The book they are fighting about now “Gender Queer” as described by Simon and Schuster:

Started as a way to explain to eir family what it means to be nonbinary and asexual, Gender Queer is more than a personal story: it is a useful and touching guide on gender identity—what it means and how to think about it—for advocates, friends, and humans everywhere.

I don’t want to harsh eir’s world, but there is no such thing as “nonbinary”. In order to be nonbinary, one must assume the binary. I am down with LGB and I have known Trans people for years, but some of these people are Nucking Futz. Oof. Remember just a few weeks ago, when libraries didn’t want that ugh Christian ugh Kirk Cameron reading to children from his new book?

I am old enough to remember when people freaked out about Britney Spears sexualizing children with her provocative looks. We even had a name for the children who dressed like Britney “prostitots”. Now, it’s totally different:

Conservatives across the country have targeted the memoir — in fact, it’s been banned in more states than any other book in America — about Kobabe’s journey to figuring out their own gender identity. They mainly take issue with a passage on consent that contains a page about sex toys, and they falsely claim that just reading the book can make a child change their gender identity or sexual orientation.

Oh, false claim? Introducing sexual themes to impressionable children could easily send an immature child down a very bad path. No false claim about it. But wait, there’s more:

“Some people were handing out fliers that claim librarians are groomers and giving out pornography at the library,” said Salem Sousley, a Jamestown resident and co-founder of Inclusive Ottawa County, a group working to foster diversity and inclusion in the area.

As worried as many residents are about the library closing, they’re more concerned about what it signals about where they live. The debate is about much more than removing a book from shelves: The Patmos Library said it even moved “Gender Queer” behind the counter after initial complaints.

“Jamestown is not a friendly place to be right now,” Sousley said. “My wife is trans, and I’m nonbinary. It’s hard living here every day knowing that your neighbors think you’re disgusting and an abomination.”

I do like having certain books behind the counter and parental permission required. But that doesn’t change the librarian’s agenda. This librarian’s rant has gone viral:

December Patmos Library Board meeting. It’s heartbreaking to listen to her but please do. It’s important for folks to understand the climate the republicans have created. pic.twitter.com/bnVX8ZTr87

Okay, a couple things here. Maybe they can’t hire people because they don’t pay enough. Pop’s Donuts down the street closed because no one would come to work but they didn’t blame “all of you”. Christians are raised to love their neighbors as themselves, but not if your neighbor is introducing inappropriate sexual matters to your children. Marian the Librarian is a little unhinged.

Here a “drag queen” admits to “grooming the next generation:

Disgusting people get disgusted looks. Sorry, not sorry. Leave children alone. Live your life. Love whom you please. Keep your agendas out of the library.