Next post
Shoplifting Migrants: Don't Crush Their Hopes And Dreams 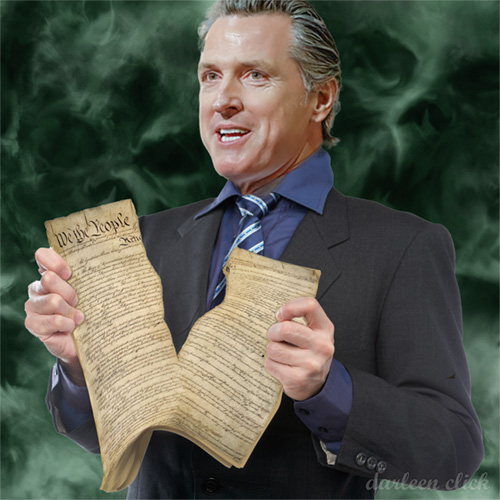 We were shocked, SHOCKED to observe California’s Leftwing Imam, Gavin Newsom, rushing to exploit the mass murder in Monterey Park in his current lusting for the 2024 Presidential election.

The mass murder at a Monterey Park was yet another opportunity for Newsom to use another pound of gel to slick back his hair and hurry to visit victims’ families in the hospital. Rather than tell his fluffy lapdogs in the media to give him some space and privacy … you know, something a decent human being would ask for when meeting with people directly affected by such an unthinkable tragedy … Newsom decided to go on the attack.

Now was it about Asian-on-Asian violence? Or about the mental health issues? Oh noes, Newsom attacked FOX NEWS.

California Gov. Gavin Newsom (D) pulled no punches on Monday with his blistering critique of Fox News, which he accused of “not doing a damn thing about gun safety, not a damn thing for decades” while visiting victims of a weekend mass shooting at a Monterey Park ballroom dance hall in which 11 people were killed. (snip)

“It’s a disgrace what they say, what these people say every single night,” Newsom told reporters … “There’s xenophobia, they’re racial priming, what they have done to perpetuate crime and violence in this country, by scapegoating, and by doing not a damn thing about gun safety, not a damn thing for decades.”

French Laundry Gavin is as predictable as he is infuriating. In what universe does a cable news station cause a 72-year-old Asian male to murder other Asians and commit suicide?

What has Gavin Newsom done about the conditions that Democrat policies that have lead over the last decade to increases in crime and murder? Policies that include limiting law-abiding citizens’ rights to self-defense?

The 1970’s saying “The personal is political” was reframed by Obama’s unctuous, grasping Chief of Staff Rahm Emanuel as “You never want a serious crisis to go to waste” and, boy howdy, has the pseudo-religious Left lived by it.

Just think about what the outcome in Monterey would have been if an Elisjsha Dicken was in attendance?

And Gavin didn’t stop with just attacking Fox News. In a rush of hubris, feeling he was in a safe space, Governor Hairgel attacked the Constitution.

“Suicide pact”. Oky dokey. Let’s leave aside for a moment Gavin’s political use of “suicide” in a case that was a murder-suicide, but his riff on the hoary-old phrase The Constitution is not a suicide pact* is a sure indication that he finds the Constitution more of a guideline than actual rules limiting government.

What is surprising is that Norah O’Donnell actually slipped the leash and challenged Gavin’s anti-2A polemic.

After California Governor Newsome called the Second Amendment a "suicide pact", CBS's Norah O'Donnell actually pushes back on him:

"But there's many people in this country that support the second amendment and are lawful gun owners." pic.twitter.com/pqUTmj7zG7

Whoa! Did we just witness an act of journalism? Imagine that! Yes, there are a little more than 100 million individual gun owners in America – for sport, for recreation and, yes, for self-defense. Newsom immediately back-peddled clarified he had “no ideological opposition” to gun owner ship BUT.

For Leftwing Politicians, there’s always a but when they feel their power is challenged.

California has the strictest gun laws in the nation. But those intent on crime don’t care. And Leftwingers don’t care either. The law-abiding being able to protect themselves is never a priority. Indeed, limiting the right of self-defense is more feature than bug.

Remember this as Gavin slithers across the country in his quest for the Oval Office.

*Trivia moment: the origin of the phrase “The Constitution is not a suicide pact” is Supreme Court Justice Robert H. Jackson in his dissenting opinion in Terminiello v. City of Chicago in which SCOTUS held that Chicago’s “breach of peace” statute violated both first and fourteenth amendments. Jackson put “public order” above free speech. Sounds kind of familiar, eh?