Remember Nidal Hassan? I sure do. I know many of our readers do as well. He’s the Army psychiatrist stationed at Fort Hood, TX who, on November 5, 2009, proceeded to severely wound 32 soldiers and civilians.  He’s the terrorist who, on that same day, murdered the 13 brave men and women you see pictured below.

This is a man who ran power point presentations in 2007 telling Army supervisors and other military mental health professionals that Muslims in the US military are a threat to our country . The final slide of his powerpoint stated:

“Department of Defense should allow Muslims [sic] Soldiers the option of being released as ‘Conscientious objectors’ to increase troop morale and decrease adverse events.”

Is he in jail? Yes. Actually he’s in prison at Fort Leavenworth. He was convicted on 32 counts of attempted premeditated murder and 13 counts of premeditated murder, and is sitting on death row. But the ONE thing he wasn’t convicted of is, yep you guessed it, terrorism or even treason against the United States. OH NOOO. The Obama Administration powers that be determined that, no matter all his embracing of the terroristic leanings that are Islam, this was only a piddling “workplace violence” incident.

Do you still want to call it workplace violence when convicted terrorist killer Hasan writes letters to ISIS asking to join their caliphate? Yes, he really did, just two short months ago. According to the Inquisitor:

Nidal Hasan wrote to ISIS leader Abu Bakr al-Baghdadi asking that he become a “citizen” of the caliphate.

“I formally and humbly request to be made a citizen of the Islamic State,” Hasan wrote to the ISIS leader.

The handwritten letter consists of two pages and describes some of Hasan’s religious beliefs in turning to ISIS:

“It would be an honor for any believer to be an obedient citizen soldier to a people and its leader who don’t compromise the religion of All-Mighty Allah to get along with the disbelievers.”

Think its still only workplace violence? How about the latest offering? The terrorist Hasan recently sent a warning letter to Pope Francis. Yes, you read that correctly. Last night it was reported that he sent a letter, handwritten and 6 pages long, to Pope Francis.  Yes, that Pope Francis. 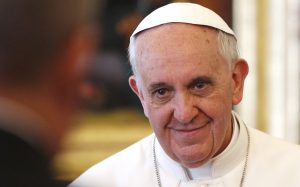 According to Catherine Herridge of Fox News:

Hasan directed his attorney John Galligan to mail the undated, six-page, hand-written letter to the pope. A copy of the letter – titled, “A Warning To Pope Francis, Members Of The Vatican, And Other Religious Leaders Around the World”

The 6-page letter referenced the Koran multiple times and provided his version of “believers” with an itemized list to follow. Specifically, a section called “Jihad” states:

“The willingness to fight for All-Mighty Allah can be a test in of itself. … Believing fighters (mujahadeen) have a greater rank in the eyes of Allah than believers who don’t fight… and are encourages to inspire the believers.”

I don’t know about you, but statements like that sure don’t fit the “workplace violence” criteria. In fact, I’d say it fits the terrorist criteria too well. Plus, Hasan hasn’t ever been shy about making his beliefs clear. The attorney for the Fort Hood families, Neal Sher stated:

“His jihadist leanings and willingness to commit jihad were known for years before the 2009 atrocity,” Sher said. “And ever since then, he has made it abundantly clear he believes in jihad and has attempted to justify the slaughter that took place at Fort Hood.”
During the trial, Sher said Hasan attempted to testify and offer a “defense-of-others plea, in other words, he killed Americans at Fort Hood in defense of his brothers, al Qaeda and now ISIS. Yet again, it demonstrates he wasn’t shying away from [the shooting], he was proud of it.”
Sher likened the approach to “putting [the administration’s] head in the sand. They do not want to acknowledge a terrorist attack took place on their watch on American soil. And layered over that is a good dose of political correctness.”

No matter which way you slice it Nidal Hasan is a terrorist and he has stated it loudly and clearly. It doesn’t matter that he is on death row for his “workplace violence” convictions. His letter to ISIS and the letter to Pope Francis clearly shows that he is firmly in the terrorist camps of the Taliban and ISIS, and that he’d do anything to be out of that jail cell and wreaking havoc on the United States any way he could. You know what?  He can write all the warning letters he wants, and the politically correct crowd can still attempt to call what happened on November 5, 2009 “workplace violence”, but I know better as do the families of the victims and the survivors of that day.  Nidal Hasan is a terrorist.  Period. Full. Stop.  To label him anything else would be an insult to all Americans, most especially to our men and women in uniform who gave their lives that day.