Previous post
Doing the assaulting that Americans won't do

Flashback Video of the Day

Flashback Video of the Day 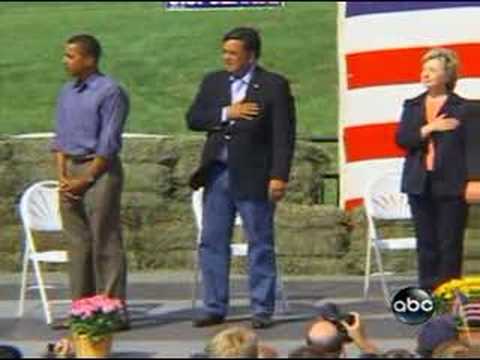 Here’s a flashback video for today, of when Obama refused to put his hand over his heart during the National Anthem.

There’s no real reason to post this. I’m just doing it because I can. So THERE.

Here’s a little reminder on just what exactly is required during the playing of the National Anthem, since there seems to be some debate on it:

The pledge of allegiance should be rendered by standing at attention, facing the flag, and saluting.

When the national anthem is played or sung, citizens should stand at attention and salute at the first note and hold the salute through the last note. The salute is directed to the flag, if displayed, otherwise to the music.

“Saluting” basically breaks down like this. If you are an active member of the military, in uniform, you stand at attention with a right-hand salute. If you are a retired member of the military, you stand at attention with your right hand over your heart (although many still salute the flag anyways). Civilians with no hat on their head stand with their hand over their heart. Civilians with a hat on their head stand, remove their hat, and place their hat over their heart. The end.

Of course, if I was Barack Obama, my defense would’ve been that I wasn’t sure if it was the National Anthem being sung. It took me a few seconds to realize that The Star Spangled Banner was what was being sung! I mean, that was absolutely horrendous. Was she just making up how the song went as she sang? It sure didn’t sound like any rendition of the National Anthem I’ve ever heard.