Next post
Monkeypox Vaccines, Brought to You By Joe Biden 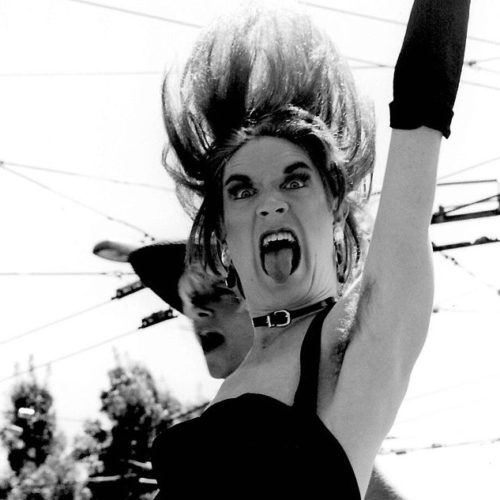 Back in the day, never, ever, in a million years, when some of us sat in Kindergarten classrooms did we imagine a man dressed in drag reading a story to us. The tide has since changed in our classrooms today.

It’s not just Drag Queen Story Hour that is coming to our schools. Schools across America, in honor of Pride Month…or just for the hell of it…are hosting full-on drag shows. Sometimes, unbeknownst to the parents.

Now, I realize that some parents actually want to drag their kids to bars on weekends to participate in these shows. From a drag show in Texas:

Sure, dress your kid up in a Pride t-shirt to watch a drag queen dance in front of a bright, neon sign that reads, “It’s not gonna lick itself“. (Mommy? What does that mean?) You are one hip, cool parent. You and your blue/green hair get your woke playgroup’s seal of approval. “Now, little Johnny, be nice to the guy in a g-string in the name of inclusion, acceptance and tolerance. Here’s a few dollar bills to shove, uh, down there.”

Seriously, what is stopping parents from taking their hyper-sexualized, vintage Abercrombie-wearing-manly-man, 5 year-old future football all-star/fratboy to the strip club? Oh, that, is wrong. But shoving dollar bills down the g-string of a drag queen (AKA a man with an intact penis presenting as a caricature of a true woman) is kosher? What in the actual you-know-what?

This prompted potential legislation in the State of Texas that has the woke playgroup flipping the eff out:

All I’m suggesting is that we do not allow drag shows in front of children in the same way we do not allow strip shows in front of children in Texas. I believe it’s the same idea of decency and morals that we don’t let children have women dance around in their underwear and put money in their underwear. In the same way, we should not allow that with a man dressed in women’s clothes.”-Rep. Bryan Slaton (R), Texas

But there is even a bigger mess to deal with when it comes to exposing children who barely know that two plus two equals four, to a drag queen doing splits and gyrating on the school auditorium stage. In fact, some parents are completely unaware of these events happening at their schools.

I see a huge difference between something happening on a weekend, that is not sponsored by a school, that parents decide they want to expose their children to, [and] the conversation around schools hosting drag queen performances.

There is a reason to be concerned that there is a faction … of people who are pushing a lot of this stuff … [that] just don’t buy into this idea of childlike innocence. There’s definitely a group of people that is out there really trying to push the boundaries because they do not believe that children need to be protected or shouldn’t be protected from this kind of content.”-Erika Sanzi, Director of Outreach for Parents Defending Education

In going along with the current trend, a report highlighted in The New York Times a few days back, revealed a sharp rise (insert inappropriate drag queen joke here) in transgender young people in the United States. I remember when the trends were walking around the neighborhood with the biggest Boom Box you could find and staying out too late. The trends, now? Boys dating girls who want to “transition” and then calling these girls their “boyfriends”. That’s another story for another day. Back to drag queens.

I have nothing against drag queens or drag shows. I, myself, have been to a drag queen BINGO with friends. No, I did not drag my child to this event. Why? Because drag queen humor is solely focused on innuendo and sometimes, it’s blatantly sexual. The drag platform itself is not for young children. Now, I know the Drag Queen Story Hour founders may beg to differ.

Drag Queen Story Hour could not be more disappointed in disingenuous politicians who are trying to score points by attacking programs like ours, which use drag as a traditional art form to promote literacy, teach about LGBTQ lives, and activate children’s imaginations. Rather than address real threats across the country, like the devastating epidemic of gun violence, right-wing politicians are spreading dangerous conspiracy theories about, and inciting violence against, drag performers and LGBTQ communities.

This is part of a coordinated campaign to deny the rights of LGBTQ people, who already endure disproportionate rates of suicide and homelessness, and legislate us out of existence. Any attempt to criminalize our work is rooted in tired homophobic and transphobic hate and misinformation, and we refuse to give in to politicians who are too bigoted and boring to comprehend our vision for a world in which every child can be safe fully expressing who they are.”-DQSH spokesman Jonathan Hamilt

This is more than disingenuous politicians, Jonathan. There is a faction of parents who are simply not okay with this type of “curriculum”, (as overpaid, Academic Officers call it), in their child’s classroom. There are other ways to teach traditional art and “activate children’s imaginations”, don’t you think? And as far as Drag Queen Story Hour promoting literacy? Please! Ask any teacher at any school about post-COVID reading scores. Or, simply put, the desire of American youth to read for fun. I will admit, it is kind of hard for kids to read for “fun” if they don’t know how to read.

It is also kind of hard to read for fun, if there’s a big sign outside of the school that says “NO GUNS ALLOWED”, offering an open area for a psychopath shooter to enter a classroom and shoot up a room of Kindergarteners and kill them. So, yeah, nice try on that bullet point (no pun intended), Hamilt.

As far as coordinated campaigns go, the left spits their rhetoric back into the mirror again. No one here is campaigning to deny the rights of LGBTQ people. No one is trying to legislate them out of existence. The left, however, is campaigning their agenda in our schools. This is the true crux of the problem. When Drag Queen Story Hours, mock stripteases, and “Comprehensive Sex Ed” get stealthily thrown into their child’s “curriculum”
unbeknownst to parents of young Kindergarteners, taxpayers in school districts, these parents have the right to question the agenda at hand here. (Good luck finding those opt-out forms, parents-they do not make them easy to find).

The average person out there just wants to be a good person. They want to feel like they support people, [that] they believe in kindness and respect and tolerance. And that’s what they think they’re doing by supporting some of this stuff.”-Erika Sanzi, Director of Outreach for Parents Defending Education

Parents have a right to question all of this. Especially when overall performance scores and academic rigor are at an all-time low. Funding for up-to-date reading curriculum to improve overall student performance or drag queen appearances in the name of “Social-Emotional Learning” have been discussions at many a school board meeting and this is our new normal. And this is a problem. And no, this problem is not gonna lick itself.