Previous post
Justices Targeted For Protests At Their Homes 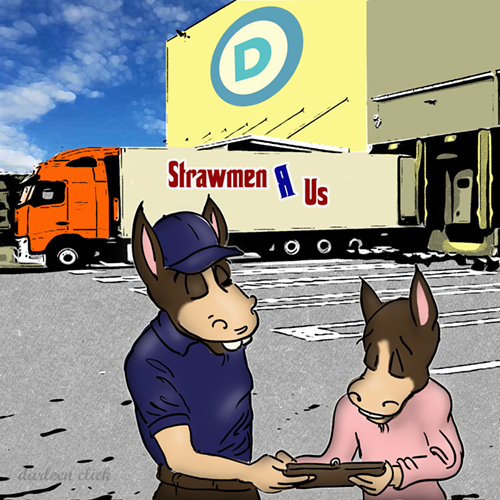 As some wag recently put it, “Is it riot season already? I still have my Ukraine decorations up.”

As The Current Thing™ changes almost daily, it is hard to keep with the latest slanders, malicious gossip and mendacious charges the Wokeistanians of the Democrat party keep trotting out. Victory Girls’ Nina covered Creepy Joe’s brain farts just yesterday where he accused 70 million fellow Americans as part of the most extreme political organization EVAH!! RHEEEE!!!

Not a Democrat Congresscritter from, say, Frisco or Seattle, looking to demagogue for the cameras but an American President.

The trucks filled with strawmen has backed up to the DNC warehouse and we’re witnessing the daily deliveries of strawmen to be deployed to operatives nation wide. We’ve witnessed Florida’s governor, Ron DeSantis smeared as DeathSantis, Elon Musk called a racist because of the accident of his birth in South Africa, and then stuff like this from Rep. Fangbanger:

Pity poor Clarence and Ginny Thomas that no one told them what the GOP really wants.

It’s not just married couples of differing hue that should be rending their garments, but pity the poor hook-up culture

Nothing could be better for society and the health of individuals both physically and mentally than the decimation of hook up culture. pic.twitter.com/pfVMrX5wvU

Inflation is rampaging, the GDP is shrinking, crime is up … heck, even Dave Chappelle can’t catch a break …

But but but LOOK OVER THERE!! what utter evil cads, these GOPers, what won’t they do next?

Stay tuned, the next load of strawmen is already being distributed. Deliveries daily.