Editor’s Note: This is a guest post submitted by Ruthie Hendrycks, a blogger, and friend of Victory Girls.

Obama, the Democratic Party, and a few Republicans are holding the funding of the Department of Homeland Security hostage – putting each and every one of us in danger – ALL FOR ILLEGAL ALIENS. 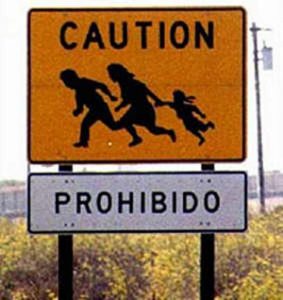 On Tuesday, February 3rd, the Senate voted to approve the House Department of Homeland Security (DHS) Funding bill – A bill that WOULD fund the department BUT EXCLUDED monies for Obama Executive action for illegal aliens – meaning amnesty. The bill failed on a 51-48 vote – it needed 60 votes to pass. It will now head back to the House or slowly fade away, that is, if we let it – We Must Not!!!!!

While the Democratic Party has already started in with the blame game – they are very good at that – making statement such as “The Republican Party is to blame for the lack of a funding bill for our homeland“, the Republicans seem dumbfounded to have a clear narrative in return.

So let me provide them with one and I quote:

“Now is NOT THE TIME to mess with what homeland security we do have – pass the House Bill and FUND DHS… without amnesty and Secure The Border! If amnesty is more important to Obama than our security, let him veto it”

Alarming is that while Congress continues to play games with funding homeland security – all in the name of the ILLEGAL ALIENS – we were watching the news coverage of yet another murder at the hands of ISIS – a Jordanian pilot being burnt alive – the video is horrific!!!!

One must wonder why amnesty, via executive unconstitutional lawless fiat, is more important to Obama and the Democratic Party than our safety, security, and sovereignty. DHS could easily be funded without the amnesty directive effectively postponing the discussion and debate for another day, but instead we see partisan lines drawn in the sand at our nations’ expense.

Have these pandering politicians (primarily but not exclusively the Democrats) stopped to consider how many terrorists may be or have entered with the illegal aliens that they seem to be falling all over themselves for while our borders and ports remain unsecured? Have they ever wondered just – who is the illegal alien they are pandering for?

If Obama can just do what he wants – when he wants – why do we even need Congress? Congress do your DUTY NOW – Democrats and Republicans alike – fund the Department of Homeland Security WITHOUT amnesty. The only reason this is being rushed is because Obama wants it to be.

Ruthie Hendrycks is the President of Minnesotans Seeking Immigration Reform and Host of The Ruthie Report. Ruthie is the Minnesota State Adviser for the Federation for American Immigration Reform (FAIR), The State Coordinator for The Remembrance Project/Stolen Lives Quilt, A Member of the Texas Border Volunteers and an Advocate for the Law Enforcement Officers Advocates Council. She is also listed as a Top Conservative Talk Radio Host at toptalkradio.com. You can contact Ruthie at minnsir@yahoo.com