This past week I was in Las Vegas for a marketing conference. Vegas is, of course, the fiefdom of Lord-Senator Harry Reid. While I was in Vegas,  I heard the news out of Washington, D.C., that Lord Harry had taken to the floor of the Senate to insist that the NFL force the owner of the Washington Redskins football franchise to change the name of the Redskins.

Now, this ongoing saga of the nickname of the Washington football team has been driving a wedge between the team’s fans for decades. I recall the same kind of ludicrous political correctness going on in the 1980s when I was teaching junior high school. Then in the 1990s it flared up again when I was in law school. Since the beginning of 21st millennium the manufactured controversy has continued to pop up from time to time.

The feigned outrage never seems to come from the people who are allegedly being denigrated by the term “Redskin”— that is, Native Americans. Rather, the hype almost always comes from some liberal politician who either needs to deflect attention from him or herself or to attract attention to him or herself. Naturally, then, I had to ask what Lord Harry was trying to hide this time as he got on his soapbox. Almost certainly he saw this as an opportune time to capitalize on the recent controversy in the NBA with the L.A. Clippers basketball team and that team’s owner, Donald Sterling.

So on Friday night I took the red-eye flight back from Las Vegas. After arriving early Saturday morning in Baltimore, I drove through Northwest Washington, D.C., to get home. Once I got home, I saw on The Drudge Report that a local D.C. rapper named “Wale Folarin” had Tweeted some pretty harsh messages about Lord Harry Reid. Nigerian American Olubowale Victor Akintimehin calls himself “Wale Wale” (pronounced waw lay waw lay). The thirty-year-old performer grew up in the D.C. area, going to school primarily in liberal bastion that is the People’s Republic of Montgomery County, Maryland, and he currently resides in the District.

I had never heard of Wale Wale before reading his name in The Washington Times. That’s not unusual since I listen to almost no music and, even if I did, it would not be rap. That is in part because of the raunchy lyrics in so many rap songs, such as the song of Wale Wale called “Bad.” So, what could a thirty-year-old black rapper in our Nation’s capital have to say that would warrant mention in this blog post? Almost miraculously Wale Wale, unlike most African Americans his age, recognized and spoke the truth about Harry Reid.  Here are screen shots of Wale Wale’s tweets from Friday. The first tweet is at the bottom while later posts are added at the top. 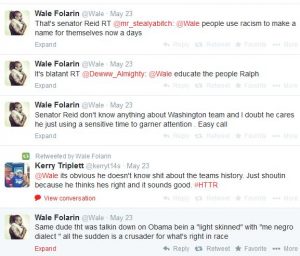 One local newspaper, The Washington Times, reported on the truthful tweets of Wale Wale.  He dubs Reid a “hypocrite and a devious cat,” and says Reid is just using a sensitive time to garner attention for himself. Wale Wale is most likely a Redskins fan, having grown up in the D.C. area, so his emotions undoubtedly are running high as he defends his team. He also says that he researched Reid and saw where, in 2008, Reid commented on Obama not having a “black dialect,” but being able to use one when he wanted to. Wale notes that Reid is using racism as a weapon and that he is a hypocrite. Wale’s ability to see through Reid’s charade of pretending to be interested in the feelings of Native Americans is quite astute and refreshing.

Maybe Mr. Wale should run for the public office.