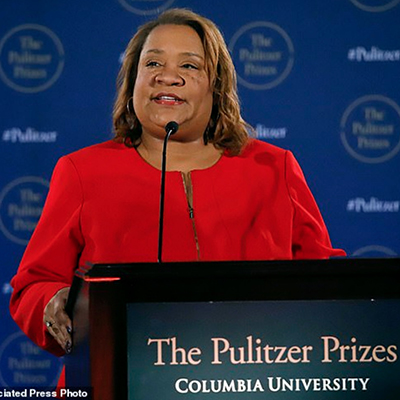 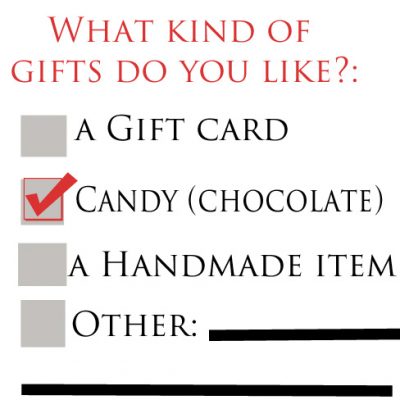 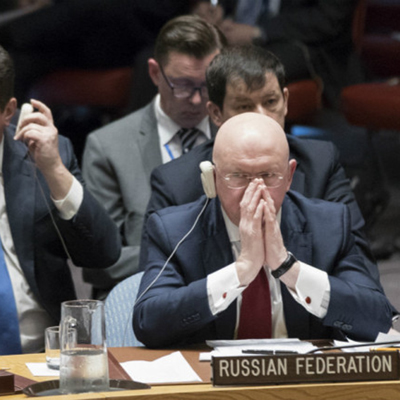 Saturday’s Coalition of the Tres Amigos airstrikes against the Assad regime in Syria are leading to some interesting developments on the ground in the aftermath. Ostensibly  a justified retaliation for the use of chemical weapons against civilians (read: SENDING A FIRM MESSAGE)…

…the strikes themselves were fraught with awful risk, considering the Russian and – to a lesser extent – Iranian assets on the ground. What WOULD Russia do in response? 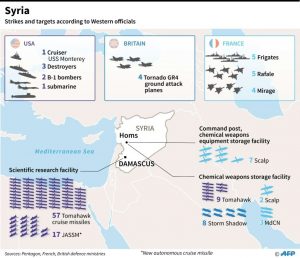 The Russians managed to get their boats out of harbor and apparently most of their folks out of harm’s way. But ‘t’would appear there may be a chance they’re back in harm’s way at the moment – chemical harm. Possibly even scrubbing dirty fingerprints (DO go on, you say in surprise, right?). For some reason, the U.N. teams tasked with investigating and documenting the chemical attacks have been running into Russians and Syrians running interference:

DOUMA, Syria (AP) — Syrian and Russian authorities prevented independent investigators from going to the scene of a suspected chemical attack, the head of the chemical watchdog group said Monday, blocking international efforts to establish what happened and who was to blame.

The U.S. and France say they have evidence that poison gas was used in the April 7 attack in the opposition-held town of Douma, killing dozens of people, and that Syrian President Bashar Assad’s military was behind it.

But they have made none of that evidence public, even after they, along with Britain, bombarded sites they said were linked to Syria’s chemical weapons program.

Syria and its ally Russia deny any chemical attack took place, and Russian officials went even further, accusing Britain of staging a “fake” chemical attack. British Prime Minister Theresa May accused the two countries — whose forces now control the town east of Damascus — of trying to cover up evidence.

“Wurt da furk!” as a famous chef of my acquaintance is prone to exclaim.

Monday afternoon there was a “tense” face to face between the four principle parties at The Hague and the accusations started flying like projectiles.

Chemical weapons experts are due to arrive in Douma on Wednesday to probe an alleged poison gas attack, Russian officials said, as the US voiced fears Moscow may already have “tampered with” evidence at the site.

Following weekend missile strikes on Syria by the US, France and Britain, Russia traded accusations with Western nations on Monday, dismissing as “a blatant lie” accusations that Moscow was hindering the investigation in Douma.

As much as the Russians pound a desk and insist nobody’s stopping anybody from going anywhere, the facts on the ground belie the performance.

“The team has not yet deployed to Douma,” Uzumcu told an executive council meeting of the OPCW in The Hague.

Instead, Syrian authorities offered them 22 people to interview as witnesses, he said, adding that he hoped “all necessary arrangements will be made … to allow the team to deploy to Douma as soon as possible.”

…Earlier Monday, Russian Deputy Foreign Minister Sergei Ryabkov said the inspectors could not go to the site because they needed approval from the U.N. Department for Safety and Security. He denied that Russia was hampering the mission and suggested the approval was held up because of the Western airstrikes.

“As far as I understand, what is hampering a speedy resolution of this problem is the consequences of the illegal, unlawful military action that Great Britain and other countries conducted on Saturday,” he said.

The Syrians have completely retaken the area and, while chemical weapons teams weren’t allowed in because of security, hazards and American bombs, they managed to get a cadre of foreign reporters and media safely in for a tour. Part of the schedule included stopping at a hospital for an explanation of what the “chemical weapons attack” was really all about.

Even though the OPCW team was not allowed in, the Syrian authorities organised a tour of the town for the foreign press, including AFP.

It included a visit to the main hospital to which the victims of the alleged chemical attack where taken.

Medical student Marwan Jaber said no chemical weapons were used on April 7. “Suffocation cases arrived as a result of the debris, dust, fire and smoke. They were given routine treatment”, he told AFP.

But “strangers entered as we were in a state of chaos and spread a rumour among people there had been a chemical attack, and people became alarmed.”

Nothing to see here.

Russian Foreign Minister Sergei Lavrov on Monday denied that Moscow was interfering with evidence of a suspected chemical weapons attack in Syria after Britain said international inspectors were not being allowed into the site in Douma.

“I can guarantee that Russia has not tampered with the site,” Lavrov told BBC’s Hardtalk programme.

He also said that the evidence of a chemical attack carried out by Syrian forces cited by Britain, France and the United States had been based “on media reports and social media”.

Lavrov denied that any chemical attack had taken place, telling the BBC: “What did take place was the staged thing”.

Russia has accused Britain of being involved in staging the attack.

Seth Doane of the CBS Evening News had a riveting video report on tonight’s broadcast. He was the only American network correspondent to get into the city. I don’t believe he’s falling for the banana-in-the-tailpipe “choking on dust” explanation. I am also sure the regime is looking to curtail his travels after that report.

Fortunately, the State Department is having none of it – the stalling or the prevarication.

Chemical weapons were used on Syrian men, women, and children in #Douma. Reports that #OPCW weapons inspectors require special @UN passes are completely false. #Syria and #Russia need to stop the disinformation and allow unfettered access to the attack sites.

Ambassador Kenneth Ward addressed @OPCW Executive Council today to raise our concerns about #Russia tampering in the #Douma investigation. We call on all parties to ensure the OPCW can investigate safely, quickly, and with unfettered access. #Syria https://t.co/8DiyNuV1Pi pic.twitter.com/7Fv8hfclPK

Cagey Russians are also bemoaning the fact that the Coalition of the Tres Amigos have yet to present the evidence used to justify the strikes, knowing full well they won’t. More posturing by the Kremlin and Damascus in an effort to find out precisely what the U.N. knows, and what it’s looking for. Easier to clean up before they get into town. How long the stand-off will continue is a matter for conjecture. According to the tentative agreement they hammered out this afternoon at The Hague, the inspector teams will be allowed in Wednesday morning, and this is the Russians putting that word out. But they’ve all learned their lessons in stall well from years of dealing with impotent Western entities. As soon as Assad took Douma, getting teams in was going to be a nightmare. Not for nothin’ has the regime watched the Iranians jerk inspection teams around like taffy, and these guys have the Russians covering for them. That Russian assurance of “100% of the chemical weapons are out of Syria” slathered Kerry in glory. No one in this administration is remotely that gullible.

And if Assad refuses to let the U.N. teams in, they may find out this administration isn’t remotely as quick to turn a blind eye, either.