I live just outside of Gonzales and Goliad in the home state of Ted Cruz and drive past the historical and commemorative signs several times a week. I have hundreds of photographs of my kids at my favorite local spot, La Presidio de Bahia – my favorite of which is one of all of them sitting atop a cannon. That cannon looks remarkably like this: 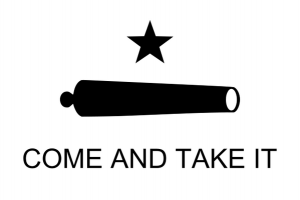 Oddly enough, that cannon looks an awful lot like the one seen here: 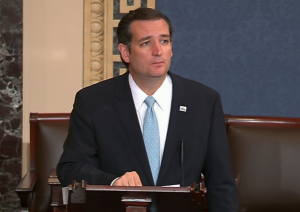 Yeah, that IS Senator Ted Cruz rocking the Come and Take It flag on the Senate floor as he filibusters in order to foment debate on funding for that untenable joke of a “tax”, the Affordable (ha!) Care Act. He does this exactly one week before the 178th anniversary of the first shot fired in the fight for Texas independence, no less. He even threw in a Darth Vader reference, God bless him.

So, as he stands for those he represents when other politicians won’t, heeding the fact that over half of Americans do not support Obamacare, will the rest of Congress finally flip the switch and finally get the hint that they are not supporting the will of the people? I highly doubt it, but voters should.

As for Congress, it would serve them well to remember that the last time an unfair “tax” was implemented and liberty was threatened, things didn’t turn out so well for those perpetuating threats to our inalienable rights.

Some won’t give their liberty up readily. They’ll have to come and take it.