Previous post
#Obamatrade: Once again, we’ll have to pass it before we can see what’s in it

Columbia’s “Mattress Girl” Releases a Sex Tape-But It Was Rape!

Columbia’s “Mattress Girl” Releases a Sex Tape-But It Was Rape! 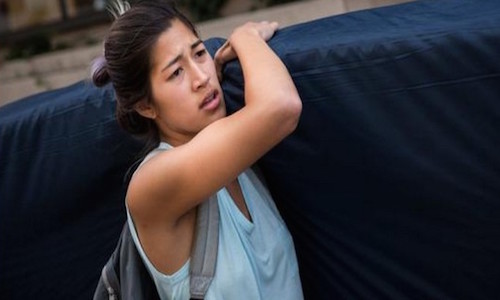 In a world where Kim Kardashian’s whole family can become famous based on her sex tape anyone can gain fame, or at least notoriety, by following Kim’s example. Enter Emma Sulkowitz, you would know her as “Mattress Girl”. This is the girl who carried her mattress around Columbia after she was “raped” by a co-ed, Paul Nungesser. Mr. Nungesser is now suing the University, but more on that later.

Entitled “Ceci N’est Pas Un Viol” -‘This Is Not A Rape’ (en Francais even! How CULTURED!) the piece is meant to be an “artistic recreation” of her alleged assault at the hands of Nungesser. According to a review posted on Breitbart.com by Milo Yiannopoulous the video shows Sulkowitz acting like a child and asking such bizarre questions as “Do you think I’m the perfect victim or the world’s worst victim?” and “Do you hate me? If so, how does it feel to hate me?”. This is interspersed with scenes of Ms. Sulkowitz delivering (those who are squeamish-don’t read on) “…probably the most lazily and messily administered head I have seen in years” according to Yiannopoulous, who is evidently gay. He continues  “If this is the sort of oral sex straight men are getting, can anyone blame them for retreating into pornography and video games?”.

So why the heck did I chose to write about this? Well, I have a unique perspective on this issue and on many others swirling around the blogosphere as of late. As the survivor of a childhood molestation-I do not choose to wrap myself in the VICTIM flag so favored by the Social Justice “warriors” of the day-I can tell you that her actions further support the theory that Ms. Sulkowitz simply regretted her encounter with Mr. Nungesser. Therefore she decided to allege rape-which is so trendy in the “feminist” community on campus these days-instead of simply pulling up her big girl panties and swearing to not repeat that particular mistake.

No woman who has endured the hell of sexual assault would willingly re-traumatize herself by depicting her violation for the masses to view at their leisure. She certainly would not engage in a masochistic passion play asking such insane questions as Ms. Sulkowitz did in her sex tape.

I am disgusted by the lamestream media’s pathetic lack of coverage of this disgusting development, just as I am sickened by the “feminists” who supported Sulkowitz in her insane “performance art” after her whoopsie moment with Mr. Nungesser.

Back to the suit he filed in April, he alleges ““the gender-based harassment and defamation” which resulted in an “intimidating, hostile, demeaning … learning and living environment.”. I say good for him! Visual arts professor Jon Kessler, who approved Ms. Sulkowitz’s senior “thesis” project of schlepping her mattress around campus for a year, was named as a co-defendant in the suit.

Hopefully, Mr. Nungesser’s lawyer is doing a jig somewhere and Mr. Kessler is realizing what a schmuck he has been played for by this disturbed woman.