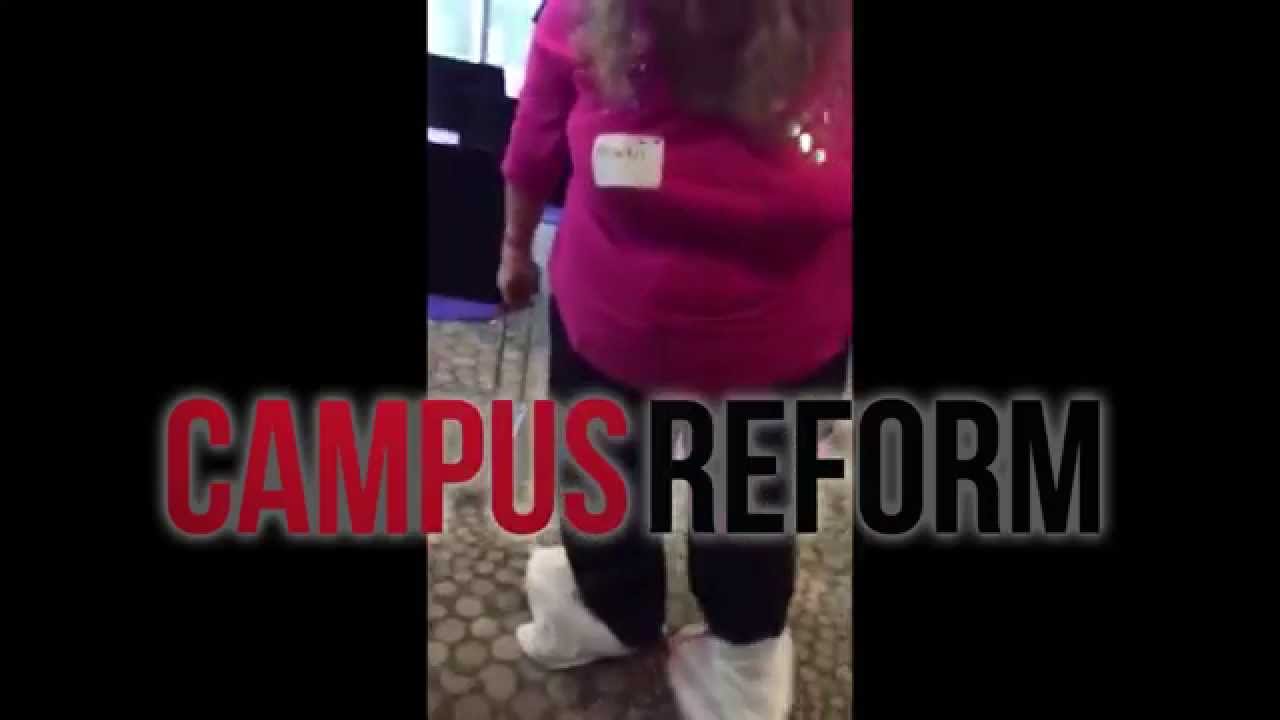 Leave it to the feministas at the National Organization for Women: they sure engage in some classy humor.

You’ll recall that in her response to the State of the Union address, Iowa Senator Joni Ernst related a memory of growing up in rural Iowa:

“You see, growing up, I had only one good pair of shoes. So on rainy school days, my mom would slip plastic bread bags over them to keep them dry. But I was never embarrassed. Because the school bus would be filled with rows and rows of young Iowans with bread bags slipped over their feet.”

Well, the secretary of the Florida chapter of NOW found that little anecdote just HILARIOUS! A real knee slapper! Those Iowa rubes! Bread bags on kids’ feet — how uncool is that!

So this singularly unattractive woman decided to don some bread bags of her own just for mockery and giggles.

Not everyone took the cheap shot. Peggy Noonan, writing in a more thoughtful frame of mind, noted that the use of bread bags as shoe coverings is from not-so-long-ago:

“I liked what Ernst said because it was real. And it reminded me of the old days.

There are a lot of Americans, and most of them seem to be on social media, who do not know some essentials about their country, but this is the way it was in America once, only 40 and 50 years ago:

America had less then. Americans had less.”

I can certainly attest to the use of bread bags as foot covering, only in a little different form.

See the kids in the picture? I’m not in that picture, but I could’ve been in one similar to that. It’s from the Chicago blizzard of 1967, and as a kid growing up in a small town in northwest Indiana I remember that same blizzard impacting us, too. Like Joni Ernst, I grew up with plenty of snow and bone-chilling temperatures.

We didn’t have UGGS then. No über-insulated boots from REI or LL Bean. We had what were called galoshes — rubber boots that went on over the shoes. My mother, always worried that overexposure to wet snow would bring on illness, would wrap our shoes (“play shoes,” mind you, not our “good” shoes) in bread bags before we put on our boots. They really did the trick; our feet stayed dry even if the snow was deep and went over the tops of our boots.

We weren’t poor. My father had a stable job with a large company, so we were comfortably middle class. Yet frugality for my family, as it was for Ernst’s, was the watchword for our lives. My parents were children of the Depression — my mother’s immigrant family being especially impacted — and purchasing frivolous items like fancy boots or multiple pairs of shoes for children who would just outgrow them wasn’t practical. The hard times of her childhood was something my mother was never, ever able to release; when she passed away at 88 years of age in 2012, she was buried in her favorite grey suit — one she had bought on sale at a favorite department store.

So while the NOW secretary thought she was merely mocking Joni Ernst, she was ridiculing all the rest of us who grew up with less than what the average child has now. I would say, however, that I grew up with more substance than she would ever appreciate:  I grew up in a reverent, two-parent home where I learned responsibility, faith, patriotism, integrity, and respect for life. I’ll bet that NOW secretary would scoff at those too.

But you know what could bring a chuckle? Seeing that Florida NOW gal spend a winter in my hometown using those designer pink tennis shoes worn by her heroine Wendy Davis as her sole footwear. She’d be begging for bread bags.