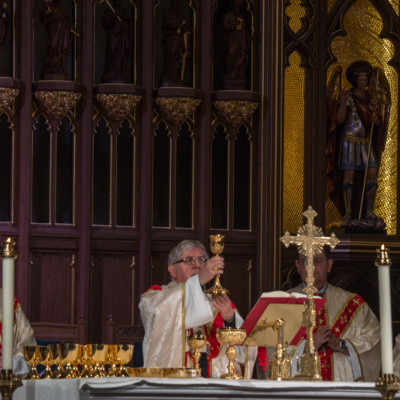 American Catholic Bishops met yesterday to discuss whether or not to deny Joe Biden Holy Communion. They voted to overwhelmingly to move the matter forward. In response, Joe Biden claimed that the Eucharist is a private matter and the Catholic Bishops won’t do it.

Joe Biden is the second Catholic to be sworn into office, after President John F. Kennedy. Legal abortion wasn’t an issue during Kennedy’s tenure, but adultery was. We now know that President Kennedy was a prolific adulterer. If Kennedy hadn’t been protected by the press, or if he had claimed to support a person’s right to adultery, I am sure the Catholic Bishops and Pope Paul VI might have denied him communion and had a thing or two to tell him.

The media swoons over Joe Biden’s faith. Where many Christians are treated as fascist, racist, homophobes, the media reports on Joe’s church attendance with awe, like when he went to Mass (late) while in St. Ives, England for the G7. Joe’s faith is okey dokey because he’s the right kind of religious person. He treats his faith like a Chinese menu, one from column A and two from column B.

One of Joe’s first acts after his inauguration was to reverse President Donald Trump’s ban on federally funded abortions and has reiterated on many occasions his support for abortion. And, that is distinctly at odds with the Catholic doctrine of support for life at every stage. Biden didn’t speak at this year’s Notre Dame Commencement, citing scheduling issues or conflicts with pudding cup time. It had nothing to do with the 4300 Notre Dame University community members who signed a petition against him, as our Kim wrote.

Now, why would these Catholic Bishops want to pick a fight with the man in the Oval Office. Maybe, and I am spitballing here, because they regard Holy Communion as Holy. Since I am a backsliding Southern Baptist, I read several articles on the meaning of Holy Communion within Catholic Doctrine. I found an article from the Cathedral of Our Lady of the Holy Rosary that was quite clear:

So when we come to Holy Communion and the priest says: “The Body of Christ”, to which we respond “Amen”, that “Amen” is much more than “so be it”, but it is saying yes to everything that the Host represents, all the teachings of the Church, not just on the Holy Eucharist, but in all things that the church teaches. As St. Augustine reminds us: “If you are the body and members of Christ, then it is your sacrament that is placed on the table of the Lord; it is your sacrament that you receive. To that which you are you respond “Amen” (“yes, it is true!”) and by responding to it you assent to it. For you hear the words, “the Body of Christ” and respond “Amen.” Be then a member of the Body of Christ that your Amen may be true.”

Aha! This is where the Catholic Bishops have hung their argument. Joe Biden has openly told everyone that he is not in accordance with Catholic Church Doctrine.

The United States Conference of Catholic Bishops on Friday proceeded with a plan that could deny communion to public figures who support abortion rights, setting up a potential public rebuke of President Joe Biden.

By a vote of 168 to 55, with six abstentions, the bishops went forward with plans for a report on the meaning of the Eucharist in the church. The vote is part of a longer process, and a rebuke of Biden and other Catholic politicians who support abortion rights is not assured. The report will be developed over the summer and presented for amendments and approval in November.
The Vatican would have to approve any action on behalf of the bishops, and would likely delay that approval if a pointed report is issued.
Biden, an abortion rights advocate who is the first Catholic US president in nearly 60 years, is the most openly religious president since Jimmy Carter. This movement is driven by the extremely conservative wing of the Catholic Church.

Everyone at CNN is a freaking potato, not just Brian Stelter. Look guys, that’s kind of what faith is about. You believe or you don’t. Like I said, it’s not a Chinese menu. Two mentions, now I am craving Chinese food.

When told about this move by the Bishops of his faith, what was Joe’s response?

I hope you watched that video. It’s less than a minute. Bless Joe’s heart. He stood there with his mouth open, like some senile, old, assisted-living resident. Then, he said that this is a private matter and the Bishops won’t do it.

I see you all laughing out there. The gauntlet has been thrown. Joe may have gotten away with a ton of stuff in his life, but the Catholic Church is kind of a big deal. And, by the way, God knows the secrets of all men’s hearts. I cannot wait to watch this play out.