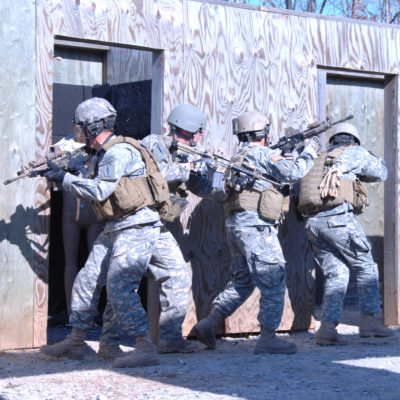 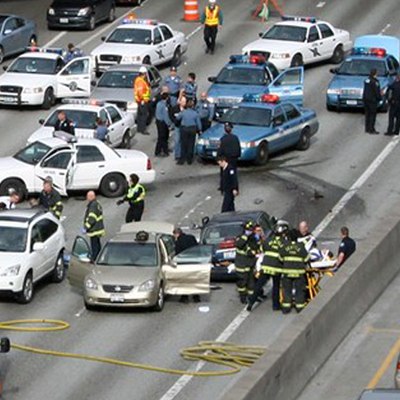 An Uber Eats driver died as the result of a botched carjacking in Washington, DC. The video of the incident, which has been viral at Twitter, is horrifying. What’s even more disgusting is that while the driver lay near death on the sidewalk after the car crashed, one of the perps complained that her phone was still in the car.

Her phone? Yes, indeed. Police arrested two teenage girls, ages 13 and 15, in the death of driver Mohammed Anwar, a 66-year-old man from Springfield, VA. The girls used a Taser to try to steal the vehicle. But Anwar stayed with the vehicle, and when it crashed the impact threw him to the sidewalk. He later died of his injuries.

Anwar was a Pakistani immigrant. His niece by marriage established a GoFundMe for his family.

“He was simply at work yesterday evening, providing for his family, when his life was tragically taken in an appalling act of violence. Anwar was a beloved husband, father, grandfather, uncle and friend who always provided a smile when you needed one. He leaves behind a family, near and far, who cherish, love and miss him dearly.” 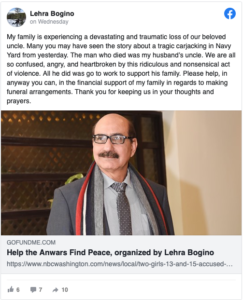 Somebody want to address that “anti-Asian hate” by Wypipo again?

Besides, said CNN, Anwar died from the accident, not from what the girls did.

Police said the girls, 13 and 15, assaulted an Uber Eats driver with a Taser while carjacking him, which led to an accident in which he was fatally injured. https://t.co/N6RpLoTu8x

Meanwhile, NBC has their knickers in a twist about a noose that someone hung from a tree near Capitol Hill. Really? What sort of priorities does the media have? I know: the narrative. That white supremacists are engaging in a wave of deadly racist hate crimes across the nation.

But that’s not the only carjacking death of the week. On Wednesday in Chicago, a carjacker shot Uber driver Javier Ramos in his vehicle when he refused to relinquish it. The perp shot him in the head and face. Now other ride share drivers live in fear of their next passenger.

On Friday, in the southwest suburb of Bridgeview, two men shot another man in the parking lot of the secretary of state driver facility — at about 1:30 in the afternoon when there were people standing in line, no less. The victim and both shooters appear to have been gang members who had argued over . . . get this . . . rap music.

The victim, Jawaun Davis, had been standing in line outside the building when the two shooters, Matthew Givens and Cortez Hudson, drove up in a red Nissan. Both men got out of the vehicle and shot Davis multiple times. Police retrieved 23 rounds from the guns, one of which was a .40-caliber handgun with a fully automatic switch.

Perhaps someone could tell me how adding more gun control would’ve kept that firearm from the shooter’s possession.

The carjacking event happened after Givens and Hudson fled in the Nissan with police in pursuit. The police lost sight of the vehicle as it sped down city streets, onto an interstate, and back onto another street, weaving between other cars. The shooters then stopped the Nissan and tried to carjack a Tesla while the car’s owner was standing outside the vehicle, showing it off to a friend.

That’s what tripped them up. The Tesla owner relinquished his pride and joy, but the geniuses couldn’t figure out how to start the car. That’s when police showed up and nabbed the pair.

I know, it’s Stupid Criminals on Parade here, which is laughable. But what’s not funny is that these two morons shot into a line of innocent people.

Even worse — accompanying Givens and Hudson during the shooting, the attempted escape, and the carjacking was the six-year-old brother of one of them. What’s more, police also believe this was an intentionally planned shooting. And still they took the little boy along.

But this is hopeful — one city, even with its Democrat mayor, has seen the disaster brought about by “Defund the Police” campaigns. On Saturday, Los Angeles increased its police funding by $36 million. The move came as a surprise, since Mayor Eric Garcetti said last year he would not increase funding for law enforcement.

Now, if only the rest of the liberal-run cities would get a clue and realize that the wave of shootings, carjackings, and other mayhem are destroying their towns. And it has nothing to do with “white supremacy” either.