Next post
Will Black Americans Ditch the Democratic Party? 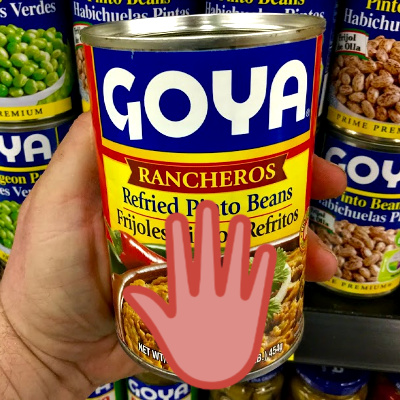 Last week, I told you that the cancel mob was going after Goya Foods after the CEO praised President Donald Trump. Thanks to the buycott by Conservatives and the hateful ineptitude of the mob, the Boycott Goya call has failed spectacularly, and it’s funny, too.

Just in case you missed the hubbub caused by Goya Foods CEO Robert Unanue last week, you can read my post here. It took all of seven nanoseconds for the cancel mob to go after Mr. Unanue and his delicious line of products. Boycott Goya trended on Twitter bigly. Alexandria Ocasio-Cortez was one of the first to tweet her repudiation of the delicious Adobo.

For sheer, frothing anger, Luis Gutierrez, formerly representing Illinois in the United States Congress, wins the Cancel Mob Participation Trophy. Really, you have got to watch this. Really, really watch:

After the CEO of Goya Foods praised @realDonaldTrump I will no longer be buying their products as they betray their once loyal Latino consumers. Join me in taking a stand as a consumer and boycotting Goya. #Goyaway pic.twitter.com/iYEAH0S01Y

So, let me see if I got the gist of that, Mr. Gutierrez. You filled your pantry with Goya products despite the fact that the “Conquistadors” came to Puerto Rico and pillaged the land. You gladly handed over your money to the people who conquered you, but Robert Unanue says Donald Trump is a builder like his own father and that tears it for you. May I remind you that you sat in the United States House of Representatives for 26 years. I could find no references online that you ever asked Spain for reparations while in Congress. But, now you want to Boycott Goya? What are you compensating for, sir? Well, I found the video very funny.

Let us contrast the mean smallness of Gutierrez with the happy altruism of Casey Harper. Mr. Harper of Virginia, is a producer for Eric Bolling, formerly of Fox News Channel. Casey took the Boycott Goya call and flipped the script. He started a GoFundMe page to raise money to buy Goya products and donate them to food pantries. Here is what he wrote on the GFM page:

What if we rise up to say no to cancel culture AND feed the hungry at the same time?

On July 9th GOYA CEO Robert Unanue said we are “truly blessed” to have President Trump.

Unanue said he will not apologize and that he also said the same about Obama:

“So, you’re allowed to talk good or to praise one president, but you’re not allowed to aid in economic and educational prosperity? And you make a positive comment and all of a sudden, that’s not acceptable.”

Now GOYA is facing a boycott that could cost the CEO his job. The liberal mob is coming for anyone who disagrees. Cancel culture at its worst. We need to have our voice heard!

Let us add this up. The cancel mob, and Luis Gutierrez, wants to ruin Goya Foods and throw 4,000 people out of work because the CEO praised Trump. Conservatives have started a buycott which will increase the volume of products sold and enable Goya to hire more people. Hmmm?

The cancel mob hates Trump and us. This all made me think of President Ronald Reagan:

The cancel mob is a bunch of internet terrorists. We must cheerfully defeat them. Every time they boycott, we must act as Casey Harper and act as happy warriors. Be happy and do good.