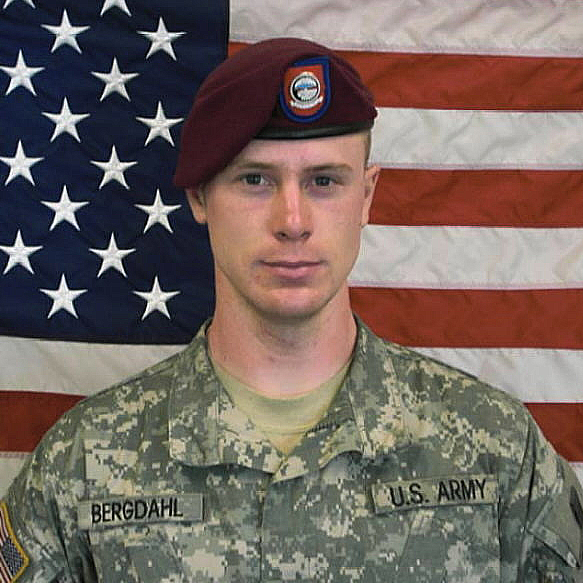 by Toni Williams in military 13 Comments

Bowe Bergdahl, Army deserter, has filed suit regarding his court martial. His lawyers are claiming undue influence by Donald Trump and the late John McCain. He should be careful what he wishes for. If only there was some way to get the Taliban to take him back. I suppose the Taliban has a no takesies backsies policy.

For those of you with a very short memory, after being released from his Coast Guard contract for psych reasons, Bowe Bergdahl was given a waiver and allowed to join the Army in 2008. Hello, Red Flag. Bergdahl made it through Basic at Fort Benning and was assigned to the Fifth Army at Joint Base Elmendorf-Richardson, Alaska. In May 2009, his unit deployed to Afghanistan.

Bergdahl was not happy with his leadership (Stop laughing, all of you Veterans.) and isolated himself from his unit, hung out with Afghans, and was learning Pashto. On June 30, 2009, after less than two months in country, Bergdahl walked off his post without leave.

Bowe Bergdahl was picked up by the Taliban (My shocked face!) and quickly handed over to the Haqqani Network, who held him for the next five years. I do not give a plump mole’s backside why Bergdahl left his post. He did.

Although there has been persistent chatter that soldiers were killed looking for Bergdahl, Stripes.com reported that is not true. Let us remain skeptical.

The Administration of Barack Obama negotiated a deal to release five detainees considered to be of high value to the Taliban from Gitmo in exchange for Bowe Bergdahl.

Whether or not any military personnel were wounded or killed while searching for Bergdahl, they were certainly at risk while picking him up. The video of the exchange is terrifying:

Every second of that exchange could have gone really, really badly. And, if you believe the special forces left Bergdahl’s white bag behind by accident, you probably voted for Joe Biden.

After an investigation, more of one than anyone involved in January 6, 2021 got, Bergdahl was charged with desertion. He was convicted. He was not given any prison time (My shocked face, again!), he was busted to Private, fined $1,000.00 per month for ten months out of his pay, and ordered to be discharged. That is a pretty cushy punishment, right? Oh no. Not for the whiny moron.

Former Army Sgt. Bowe Bergdahl has filed a lawsuit alleging “unlawful command influence” against former President Donald Trump, the late Sen. John McCain, and asking whether the judge overseeing his case should have disclosed that he had applied for a “lucrative job” at the justice department.

Bergdahl claims the “scandalous meddling” in his case likely violated his Constitutional rights to due process.

Before and during his 2016 presidential campaign, Trump “repeatedly vilified” Bergdahl, the lawsuit claims, describing him as a traitor and suggesting he should be executed by firing squad or joked that he should be thrown from a plane without a parachute.

Cry me a river! Bergdahl’s legal team has been trying this ploy, unsuccessfully, since 2016. From the Washington Post:

McCain, a vociferous critic of the “five-for-one” trade, told reporters in New Hampshire in October 2015 that Bergdahl was “clearly a deserter” and had at the minimum put the lives of other soldiers who were searching for him in danger. That, combined with the call for a hearing, means the Army must dismiss the case “because any other action would leave a cloud over the independence of the proceeding and deny Bergdahl due process of law,” according to the motion.

Back to the Army Times:

This was not the first time that Bergdahl sought to highlight allegations against Trump, McCain and the judge who oversaw his case.

In 2019, Bergdahl lost an appeal to the Army Court of Criminal Appeals on the same arguments.

“Although there was some evidence of unlawful command influence adduced at trial and in the post-trial process, the government met its burden to demonstrate that an objective disinterested observer would not harbor a significant doubt as to the fairness of the proceedings,” according to the court’s ruling.

But the lone dissenting judge in the three-judge panel, Judge James Ewing, explained that undue command influence did play a part, and he would have set aside the sentencing in light of the president’s comments.

In September 2020 attorneys for Bergdahl filed a motion in the Court of Appeals for the Armed Forces to re-examine the impartiality of Army Col. Jeffrey Nance, the military judge who sentenced Bergdahl. That motion alleges that Nance was in the process of obtaining a job with the Department of Justice and he should have disclosed that information.

What is Bergdahl thinking? I mean, shouldn’t he just say “Thank you” to everyone involved in his little psychodrama and go on about his voyage of self-discovery? Well yes. If he were not a psychological little bitch, but he is. Remember that Big Red Flag above?

I know it has been almost seven years, but can we call the Taliban and ask them about their “Takesies Backsies Program”?