This past week the hair stood up on our collective necks as Amy recounted the disgusting tale of “Mama June” Shannon — famous for nothing other than being the mother of the curiosity known as “Honey Boo Boo” — and her predilection for child abusers, including one man who molested her own daughter.

Now we’re rocked by the news that Bill Cosby, beloved actor, comedian, and all-around good guy, may be a rapist. And I am sickened.

I think of Bill Cosby as this guy, the wise dad in the wacky sweaters from the wholesome 1980’s TV program The Cosby Show. 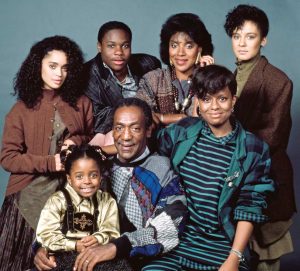 I remember him getting as goofy as the kids who acted with him in those Jello-O commercials from the 1990’s. As an aside, that’s a very young and drug-free Lindsay Lohan in this ad along with Bill Cosby:

America mourned with him in 1997 when his son Ennis was struck and killed by a driver while he was changing a tire on a Los Angeles freeway.

We have admired the man who rose from poverty, served in the United States Navy, became famous as a TV actor and comic, and eventually earned a Doctorate in Education from the University of Massachusetts. We applauded his controversial words to the black community urging them to be better parents to their children, and to stop seeing themselves as perpetual victims.

Now this beloved American pop culture figure is mired in ugly accusations by two women who claimed that he raped them:  Andrea Constand, a Temple University employee who filed charges in 2005; and Barbara Bowman, who claimed that Cosby raped her in 1986 when she was only 17-years-old.

Constand met Cosby in 2002 when she was a staffer for the women’s basketball team at Temple, where Cosby had attended college. In 2004, she claims, Cosby invited her to his suburban Philadelphia home, where he gave her “herbal medication” to help alleviate her stress. As the lawsuit claims, her “knees began to shake, her limbs felt immobile, she felt dizzy and weak, and she began to feel only barely conscious,” whereupon she was led to a sofa and given another drug. There she says she was sexually molested.

Constand’s lawyers claimed that there were 13 Jane Doe witnesses with similar stories; however, Constand settled in 2006 with undisclosed terms, and the witnesses were never called.

Barbara Bowman’s story goes back to 1985, and she plaintively asks, “Why did it take people 30 years to believe my story?” An aspiring actress and model, Bowman was introduced to Cosby in 1985, when her agent heard that the star was looking for young talent. Cosby took her under his wing, flying her around the country to watch his stand-up shows, attend golf classics, meet celebrities, and receive acting lessons. She said that she was often uncomfortable with him, but her ambition overrode her instincts.

He invited me to his New York brownstone for dinner. Staff was there. We ate in the kitchen. I had one glass of red wine with dinner. My next recollection is me, coming to, slumped over the toilet bowl, throwing up. I was wearing a man’s white t-shirt and my panties.
The t-shirt was not mine. Bill was standing over me, holding my hair out of my face as I threw up. I had no idea how I’d gotten there. I’d had one glass of wine with dinner. He was trying to soothe me with his words, “It will be okay. It’s okay.”

Though frightened and ashamed, Bowman continued to believe that Cosby could provide her the breaks she needed to enter show business, despite recurrences of what she claims were drugging and raping incidents. Finally, in Atlantic City, the dam of abuse broke, when the 19-year-old Bowman called a concierge from the Cosby hotel penthouse suite, inquiring about some missing luggage. Cosby flew into a rage, accusing her of “no discretion” in leaking information that she was calling from his penthouse. As she related the story:

He freaked out that I disclosed to the concierge the fact that a 19-year-old girl was calling from his penthouse. He couldn’t handle it. He throws me down on his bed and jumps on top of me. He used his forearm to pin me down by the neck.
He was trying to unbuckle his belt and take down his pants. I’ll never forget the sound of the clinking of his belt buckle. He couldn’t get his belt off. I’m screaming for help and trying to wrestle out of his grip while he’s trying to get his belt off and he’s trying to pull my pants down at the same time. I couldn’t get out from under him.

I didn’t stop screaming. He realizes I’m not stopping. He finally gets to a point of frustration and decides it’s too much trouble and he doesn’t want to risk it. He gets off me and calls me a “baby.” That’s when he throws me out.

She contacted a lawyer in 1987, and said she was “laughed out of his office.” No one believed that the lovable TV dad ‘Cliff Huxtable’ would rape a young ingenue. Even Gloria Allred, the omnipresent women’s rights lawyer, wouldn’t take her case.

Now it appears at the age of 77, that Bill Cosby may be coming face to face with a degenerate past, thanks to comic Hannibal Buress. Buress used his stand-up act to hurl accusations at Cosby:

Bill Cosby has the f—ing smuggest old black man public persona that I hate. He just gets on TV — ‘Pull your pants up, black people. I was on TV in the ’80s. I can talk down to you because I had a successful sitcom.’ Yeah, but you raped women, Bill Cosby. So, brings you down a couple notches.

The floodgates of accusation were opened to pour over Cosby.

On Saturday, listeners to NPR’s “Weekend Edition” heard a broadcast where host Scott Simon asked about the allegations. Appearing on the program with his wife to talk about loaning artwork to the National Museum of African Art, Cosby refused to answer Simon’s questions:

This question gives me no pleasure, Mr. Cosby, but there have been serious allegations raised about you in recent days. You’re shaking your head no. I’m in the news business, I have to ask the question: Do you have any response to those charges?

Shaking your head no. There are people who love you who might like to hear from you about this — I want to give you the chance.

This coming Wednesday, Cosby was scheduled to appear on The David Letterman Show. Inexplicably, his name was dropped from the roster this past week to be replaced by Regis Philbin. There was no word as to whether the decision was Cosby’s or the the show’s.

The crowning PR failure occurred last week through social media. Cosby’s publicity handlers promoted a Twitter game in which Twitter followers would “meme” a picture of Bill Cosby. It ended in disaster, and was pulled within hours after images like this showed up: 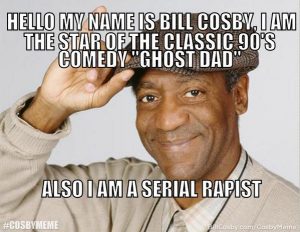 We all know the dangers of pile-on justice, of trying people in the court of public opinion. Mr. Cosby should be able to defend himself from his accusers. But as an American who has long admired Bill Cosby’s talents and achievements, I see that the nation is turning against him. And that’s a sad thing to observe.

Over the last several weeks, decade-old, discredited allegations against Mr. Cosby have resurfaced. The fact that they are being repeated does not make them true. Mr. Cosby does not intend to dignify these allegations with any comment. He would like to thank all his fans for the outpouring of support and assure them that, at age 77, he is doing his best work. There will be no further statement from Mr. Cosby or any of his representatives.
– John P. Schmitt, lawyer for Bill Cosby