Previous post
Media To Kamala: Be Presidential For SCOTUS Hearings

Next post
Denver Shooting Is A Legal Hot Mess 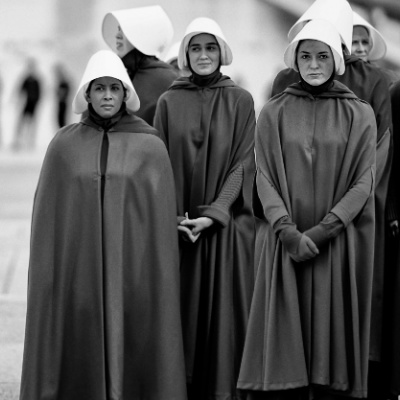 Amy Coney Barrett will begin her inquisition before the Senate Judiciary Committee on October 12. Much has been made of her Christian faith and her membership in the group People of Praise. The Inquisitors may use the term handmaid as if it is a bad thing. It is not.

The Christian faith is under attack by the Democrats. The Dems will deny, deny, deny, but the evidence is as clear as the condescending scowl on the face of Kamala Harris, when she questioned Brian Buescher on his membership in the Knights of Columbus. Or, when Dianne Feinstein declared, “the dogma lives loudly in you” to Amy Coney Barrett in 2017. None of us can imagine the Democrats questioning a believer of any other faith regarding his/her membership in a club. No, not for one minute.

Christian faith is fine and dandy, if it’s “in name only”. Joe Biden-type faith is fine. He goes to Mass every chance he gets. But, he supports the Liberal sacrament of abortion, so Biden’s a good Christian in the Democrat view.

Indeed, in the Washington Post wrap up on ACB, abortion and the preservation of it is the main concern:

That bring us to Amy Coney Barrett, the handmaid of Christ. To be sure, there will be much sneering and derision about Barrett’s membership in a Christian group called “People of Praise”. Who are People of Praise?

People of Praise is a charismatic Christian community. We admire the first Christians who were led by the Holy Spirit to form a community. Those early believers put their lives and their possessions in common, and “there were no needy persons among them.”

Jesus desires unity for all people. We live out this unity the best we can, in spite of the divisions within Christianity. We are Roman Catholics, Lutherans, Episcopalians, Methodists, Pentecostals, Presbyterians and other denominational and nondenominational Christians. Despite our differences, we are bound together by our Christian baptism. Despite our differences, we worship together.

The group builds schools and works in the poorest of neighborhoods seeing to community needs. They do the Lord’s work. A woman of the the organization who makes a covenant and takes a leadership position is called a handmaid. The Democrats see this as nefarious. Right out of Margaret Atwood’s dystopian novel.

“The Handmaid’s Tale” is what the Democrats think about Christians. The plot summary of the novel sounds just awful:

Offred is a Handmaid in the Republic of Gilead, a totalitarian and theocratic state that has replaced the United States of America. Because of dangerously low reproduction rates, Handmaids are assigned to bear children for elite couples that have trouble conceiving. Offred serves the Commander and his wife, Serena Joy, a former gospel singer and advocate for “traditional values.” Offred is not the narrator’s real name—Handmaid names consist of the word “of” followed by the name of the Handmaid’s Commander. Every month, when Offred is at the right point in her menstrual cycle, she must have impersonal, wordless sex with the Commander while Serena sits behind her, holding her hands. Offred’s freedom, like the freedom of all women, is completely restricted. She can leave the house only on shopping trips, the door to her room cannot be completely shut, and the Eyes, Gilead’s secret police force, watch her every public move.

To be honest, I have never read the book or watched one episode of the series. Not my cup of tea. I am a backsliding Baptist, not a good Christian, but I do know my Bible.

Let us look at the word “handmaid”. Mary, the Mother of Jesus Christ declared herself:

Mary said, “Behold, I am the handmaid of the Lord. May it be done to me according to your word.”
Then the angel departed from her. (Luke 1:38)

And, long before the Virgin Mary, David, the Psalmist, wrote of his own mother:

Psalm 86:16, “O turn unto me, and have mercy upon me; give thy strength unto thy servant, and save the son of thy handmaid.”

David is in a day of trouble. He is poor and needy. Violent men are after him. And as always, he cries to the Lord for help. David always turned to the Lord in his hour of need. He knew God as his Rock, his Fortress, his High Tower and his Deliverer.

However, David says something very interesting in this plea for help. “Save the son of thy handmaid,” he cries to God. David, the king of all Israel was not ashamed to acknowledge his mother. The Scripture does not tell us her name but we see something of her character in David’s prayer. David understood that God knew his mother. She was a godly woman. She was a bondslave of the Lord, which is the meaning of ‘handmaid.’ The Hebrew word for ‘handmaid’ is ‘amah’ and means, ‘female servant, bondswoman.’ David’s mother was obviously not a servant of the house of Jesse but noted in Scripture as God’s bondslave. Do you notice that David doesn’t say, “Jesse’s handmaid”, but “Thy handmaid.”

Neither woman was ordered by man to be a servant to anyone. They made the choice freely. They recognized something larger than themselves and made that covenant.

To be a handmaid is to be a servant, to serve, to be selfless, to give of oneself. Let us remember that as Amy Coney Barrett begins her inquisition. Let us pray for this handmaid of the Lord.