You support the Second Amendment? You’re probably a domestic terrorist!

Next post
Justice Clarence Thomas - Liberal elites were the "worst" to me.

You support the Second Amendment? You’re probably a domestic terrorist!

by Melanie in Headlines 2 Comments 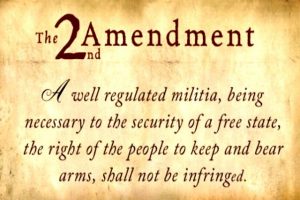 A report this week described how American citizens who support the United States Constitution (specifically the Second Amendment) were portrayed as “domestic terrorists” in training drills carried out by the Ohio National Guard in January 2013.  Why would law-abiding citizens be equated with nut jobs who would poison children at school?  Yes, that is what those crazy Second Amendment supporters did in the National Guard scenario:  they tried to poison school children with mustard gas.

Portsmouth Chief of Police Bill Raisin told NBC 3 WSAZ-TV in Huntington, West Virginia that the drill accurately represented “the reality of the world we live in,” adding that such training “helps us all be prepared.”

The ONG team discovered biological weapons being produced in the school, requiring activation of containment and decontamination procedures.

Participants in the disaster drill located documents expressing the school employees’ “anti-government” sentiments, as well as a note identifying Pierce as the fictional right-wing terrorists’ leader.

First off, the premise that people would use biological weapons to “advance their beliefs about ‘protecting Gun Rights and Second Amendment rights'” is absurd.  Whoever came up with that scenario isn’t exactly the brightest bulb in the Ohio National Guard chandelier.  Because, you know, poisoning school children would really ensure that the Second Amendment was upheld.  It doesn’t make sense – except that it reinforces the left’s stereotyping of the right.

And why politicize the scenario anyway?  Why not just have some psychotic loner decide to put mustard gas in school lunches because the demons in his head told him to?  The training response for the National Guard would be the same.

Notice how they connected the phrases “protecting Second Amendment Rights,”  “white-nationalist,”  and “reality of the world we live in.”  I am not easily offended, but the stereotype of the “reality” of only (or mostly) “white-nationalists” believing in the protection of Second Amendment rights is highly offensive.  I took the required training and have my concealed carry permit; I believe strongly in the Second Amendment; I believe strongly that I have the right to carry a gun in order to protect myself should the need arise; I am not a white nationalist.  However, the left is doing a damn good job of linking racism to anyone who doesn’t toe their liberal line of gun control.

It is also interesting to note that the same National Guard unit had a similar drill involving a left-wing terrorist scenario, but when environmentalist groups protested, they issued an immediate apology.  Meanwhile, there has been no apology for slandering people on the right.  Crickets.

Anti-government?  If government officials are going to consider me a terrorist or enemy because I support our Constitution, then I guess I am anti-government.

And the demonization of people who support the Second Amendment continues.