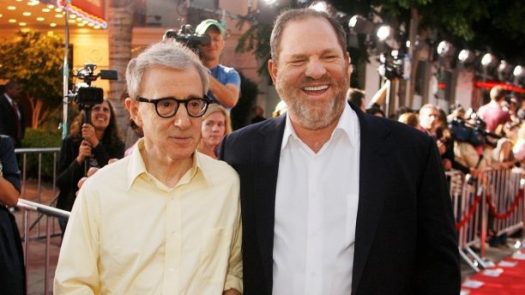 It’s truly precious when Hollywood starts virtue signaling. It is endearing to see such a backstabbing industry come to the defense of one of their own. Especially when one known pervert defends another.

Woody Allen sounded off to BBC news yesterday regarding the Harvey Weinstein allegations:

“The whole Harvey Weinstein thing is very sad for everybody involved,” he added. “Tragic for the poor women that were involved, sad for Harvey that [his] life is so messed up.

“There’s no winners in that, it’s just very, very sad and tragic for those poor women that had to go through that.”

Allen also said that he hoped the investigation would lead to “some amelioration” but also said, “You also don’t want it to lead to a witch hunt atmosphere, a Salem atmosphere, where every guy in an office who winks at a woman is suddenly having to call a lawyer to defend himself. That’s not right either.”

“That’s not right, either”?! This, coming from the stellar example of nobility, Mr. Woody Allen. Good, ol’ warm-n-fuzzy-funny-guy, Woody Allen who molested his adopted daughter, Dylan Farrow and married his other adopted daughter, Soon-Ye Previn. Who are we kidding? He molested her, too but then did the “right thing” and married her. Complete with a honeymoon to Dysfunction Junction.

“What’s your favorite Woody Allen movie? Before you answer, you should know: when I was seven years old, Woody Allen took me by the hand and led me into a dim, closet-like attic on the second floor of our house. He told me to lay on my stomach and play with my brother’s electric train set. Then he sexually assaulted me. He talked to me while he did it, whispering that I was a good girl, that this was our secret, promising that we’d go to Paris and I’d be a star in his movies. I remember staring at that toy train, focusing on it as it traveled in its circle around the attic. To this day, I find it difficult to look at toy trains.”-Dylan Farrow

You can read the whole open letter here for a refresher on what a true Hollywood gem Mr. Allen really is.

You may remember recently, Allen’s estranged son, Ronan Farrow, has joined in on the Weinstein “witch hunt” and opened the floodgates in The New Yorker:

“Three of the women—among them (Asia) Argento and a former aspiring actress named Lucia Evans—told me that Weinstein had raped them, forcibly performing or receiving oral sex or forcing vaginal sex. Four women said that they had experienced unwanted touching that could be classified as an assault. In an audio recording captured during a New York Police Department sting operation in 2015, Weinstein admits to groping a Filipina-Italian model named Ambra Battilana Gutierrez, describing it as behavior he is “used to.” Four of the women I interviewed cited encounters in which Weinstein exposed himself or masturbated in front of them.”-Ronan Farrow

It wouldn't be a "witch hunt" anyway, Woody Allen, it would be a rapist hunt.

Why yes I’m interested to know what Woody Allen and other noted child rapists think of rapists being held accountable for rape.

woody allen can’t use the “i have a daughter” matt damon speech bc he married his.

“Poor Harvey”, he says. “Let’s not turn this into a witch hunt”, he says. “Because that’s not right, either!” Because forcing sex, berating, physical abuse, and character assassination (among other dirty tactics) were all upright acts of the machine we know as the entertainment industry, right? People like Allen, Polanski and Weinstein have been part of this “atmosphere” which is what it is- a dirty cesspool of immoral, corrupt sludge. But let’s have some compassion for Harvey Weinstein, Allen says, and not create a “witch hunt”?! A “witch hunt atmosphere” could be oh-so-scary for a pervert such as Allen, I’m sure, especially if the laser focus points to him again down the road. So scaaaaawwwwwwwwy, he may have to have another young girl suck his thumb for him because he’s shaking in his boots.

Woody Allen is the true picture of a deviant. For him to even speak out on this topic indicates that he has virtually no clue and/or no remorse for his past sins. To Allen and Weinstein, we say, “bring on the witch hunt!” Burn ’em at the stake. In reality, witches look like saints when compared to these filthy scumbags.