Next post
On Fox News Tonight: The Doo Doo About to Hit the Benghazi Whirling Blades

Check out the guy doing the Happy Dance — yep, he appears to be rocking out on one of those missing Libyan jets. 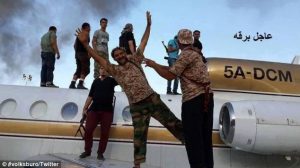 Pictures of members of the Islamist terror group “Libyan Dawn” had posted online pictures of themselves celebrating the capture of the jetliners after they destroyed Tripoli Airport last month.

Here’s another picture of the happy crew gathered together on top of one of the planes. Lookin’ gangsta!

What’s sobering is that US officials are concerned that the jetliners could be used on in regional terror attacks, especially with the approach of not only the anniversary of the 9/11 terror attacks in the US, but also the second anniversary of the raid on the Benghazi consulate, where four Americans — including Ambassador Chris Stevens — were brutally killed.

However, Libyan Dawn apparently is not the only Islamist terror group in the Libyan capital of Tripoli, which had been lost to government control on this past Sunday.  A Moroccan military expert claimed on Al Jazeera television that the planes are actually in the hands of a group called the “Masked Men Brigade,” although this report is unconfirmed. In addition, Ansar al-Sharia, the group which carried out the raid on the Benghazi consulate, is still active in the area.  And Ansar al-Shari has ties to — you guessed it — ISIS.

Now, if that’s not enough for you to worry about, the Washington Times reports that US intelligence agencies reported last month that 22 Yemeni-Americans were found in Houston training to be seamen on oil tankers. Twenty of them hail from Dearbornistan — er, Dearborn — Michigan, and two are from Oakland, California. They are not American-born, but are naturalized citizens from Yemen. The story is that they have all worked on tankers in the Great Lakes, and only came to Texas for seamen training because Michigan-based schools have closed. Yeah, that’s the ticket.

Does anyone else have a problem with this? Or is it just me?

Or, in the words of the former (failed) Secretary of State: 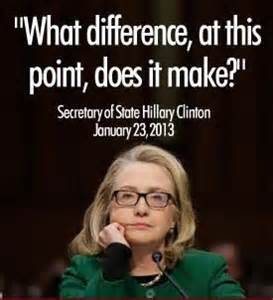