Next post
Rush Limbaugh: A Voice, A Patriot, A Legacy 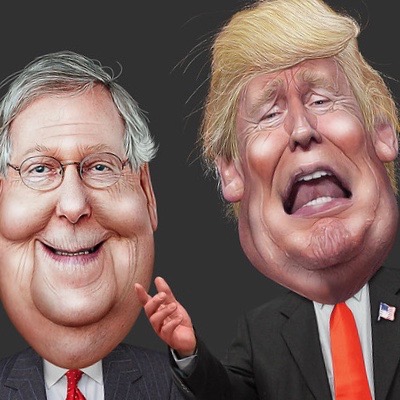 There’s not much these days news-wise that puts a smile on our faces, we know. But I must say, Donald Trump putting Mitch McConnell on-notice for being a “political hack” yesterday was quite the highlight.

Especially after McConnell’s statement this past Saturday.

After being banned for life from Twitter and relatively quiet (when one considers the likes of Donald Trump), the former POTUS issued a scathing statement that left no doubt in anyone’s mind where he stood personally with Mr. McConnell.

McConnell’s dedication to business as usual, status quo policies, together with his lack of political insight, wisdom, skill, and personality, has rapidly driven him from Majority Leader to Minority Leader, and it will only get worse. The Democrats and Chuck Schumer play McConnell like a fiddle—they’ve never had it so good—and they want to keep it that way! We know our America First agenda is a winner, not McConnell’s Beltway First agenda or Biden’s America Last.”-Donald J. Trump

Trump’s not wrong. The establishment Republicans are starting to become indistinguishable from some of the Democrats. McConnell is weak, he is spineless and he’s okay with the status quo because hell, why fight it? He’s not at all impacted either way. And as far as personality goes, he’s about as interesting as watching paint dry.

Mitch is a dour, sullen, and unsmiling political hack, and if Republican Senators are going to stay with him, they will not win again. He will never do what needs to be done, or what is right for our Country. Where necessary and appropriate, I will back primary rivals who espouse Making America Great Again and our policy of America First. We want brilliant, strong, thoughtful, and compassionate leadership.”-Donald J. Trump

Ouch. You can read the whole statement here. Disclaimer time: we are a blog. We dispense opinion. I would say, knowing most of the Victory Girls like I do here that our collective opinion happens to be that our current Republican Party needs a bit of a makeover. Why not start with Mitch McConnell? He seems like a good person to start with. We can follow sour-puss McConnell with the likes of Richard Burr, Bill Cassidy, Lisa Murkowski, Susan Collins, Pat Toomey, Mitt Romney and Ben Sasse. Again, I will say that we are a blog and we dispense not “all the news that’s fit to print” but our take on recent political events. This is the same story from “all the news that’s fit to print”, The New York Times:

The 600-word statement, coming three days after the Senate acquitted him in his second impeachment trial, was trained solely on Mr. McConnell and sought to paint Mr. Trump as the best leader of the G.O.P. going forward.”-Maggie Haberman and Jonathan Martin, The New York Times

All the news that’s fit to print peppered in with a little bit of bias and disdain, I might add.

Of course, if you read Trump’s statement, he does brag a bit about his accomplishments. And, he does not address the Capitol Riots. Could he and should he have? Perhaps. What Trump does address is the future of the Republican Party, the G.O.P. and its ‘leaders”. He paints the picture and we get the gist of it.

I love that 45 is not limited to Twitter character stops! He can get it all said better like this. He gave it to old Mitch!

The Republican Party can never again be respected or strong with political ‘leaders’ like Sen. Mitch McConnell at its helm. He is destroying the Republican side of the Senate, and in so doing, seriously hurting our Country…he doesn’t have what it takes, never did, and never will.”-Donald J. Trump

Glorious, full-blast. Again, Trump’s not wrong. Aren’t we tired of the status-quo?