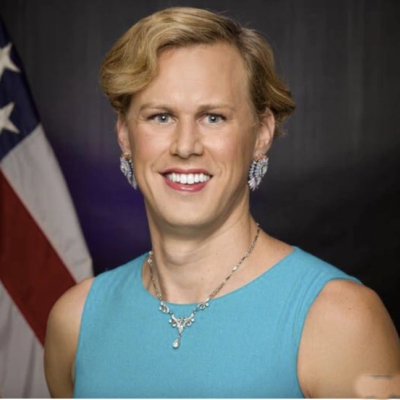 I wish this was the premise for a dystopian fiction novel about a decadent decaying society, but it is unfortunately true. The first openly Trans Officer, Major Jamie Lee Henry and his wife, Dr.Anna Gabrielien, have been charged in Federal Court with attempting to sell Personnel Medical secrets to the Russians. Major Henry is an internist at Fort Bragg, NC. The Major’s wife is an instructor of anesthesiology at Johns Hopkins. And, the story just gets curioser and curioser from there.

The Major came out as a transwoman in 2015 and applied to the Army for a name and gender change, which was granted. Dr. Gabrielien married Dr. Major Henry in that same year. The Army was very proud of its wokestry when it welcomed the Trans officer:

The major had previously touted the Army and its leadership for accepting her identity as a transgender woman.

President Donald Trump tried to end the Trans fantasy world, but was rebuked and Dementia Joe would have signed an Executive Order anyway. Look, you and I know that Diabetics cannot serve in the military because of medical issues. How in the name of Jumping Jim Gavin can Trans people serve? And, in the name of Saint Michael, the Patron Saint of the Airborne, if you are going to cosplay as a woman, please shave and try to disguise your Adam’s Apple, at least for pictures. We at Victory Girls try to never dog someone on his/her appearance, but there are times that it would be obvious if we didn’t comment.

HERE IS WHAT THEY DID, ALLEDGEDLY

They wanted to support Russia after she invaded Ukraine, according to the New York Post:

The couple started hatching the plot after Russian President Vladimir Putin invaded Ukraine in February, according to the indictment. Gabrielian allegedly contacted the Russian Embassy by email and phone to offer her and Henry’s assistance.

Just because the Army was STOOPID and accepted Dr. Henry as a transwoman, the couple thought that they could just make contact with the Russian embassy and no one from the United States Intelligence Community would notice.

While Henry allegedly had reservations about handing over the health records because it would be in violation of the Health Insurance Portability and Accountability Act (HIPAA) — her wife had no hesitations, the indictment says.

Gabrielian allegedly told the agent during an Aug. 24 meeting in Baltimore that Henry was a “coward” over the HIPAA concerns and that she violated the law “all the time.”

By the end of August, Gabrielian had passed along information on both current and former military officials and their spouses, according to the indictment.

At least five of the patients were stationed at the Fort Bragg Army base in North Carolina, where Henry was a doctor, federal prosecutors said.

The base is home to the headquarters of the US Army Special Operations Command and the Womack Army Medical Center.

One of the patients was married to an Office of Naval Intelligence employee and the undercover agent was told the spouse had a medical issue that Russia could exploit, the indictment said.

It’s not like we didn’t know many, not all, in the medical community have no ethics, but Dr. Gabrielien bragged over violating HIPAA “all the time”. Great. Just great.

According to the video, lawyers for the Army Officer and “her” wife have not publicly commented:

I have known Trans people since I was a teen, most are sincere and just wanted to live their lives in peace. This guy, and I mean guy, was gaming the system somehow. Here are the receipts from the Daily Mail:

The couple also allegedly spoke with the agent about contingency plans for their family should the operation be exposed.

Gabrilelian suggested a cover story for their interactions, and a plan for Gabrielian and Henry’s children flee the US quickly if Gabrielian and Henry were told to act in a way that could expose their communications and actions to the US government,’ the indictment reads.

The anesthesiologist allegedly told the agent to help their children get ‘a nice flight to Turkey to go on vacation because I don’t want to end in jail here with my kids being hostages over my head.’

Their children, fathered by Henry, since he “came out”. Pretty light case of Gender Dysphoria there, Soldier.

Common sense and reality need to make a quick comeback in the United States, stat. This Looking Glass world is gonna get more people killed.