So the White House releases a photograph of the Imperial President wearing mom jeans and skeet shooting at Camp David on August 4th, 2012. This, of course, is to prove to the world that Obama didn’t tell a big fat whopper when he said he “skeet shoots all the time“. Yep. The manufactured “He likes guns!” meme. 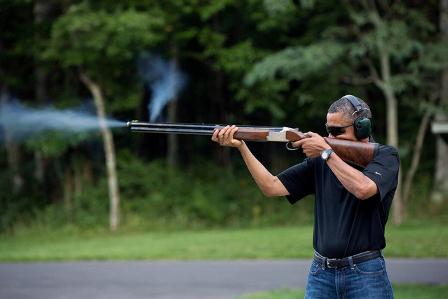 But there’s just one problem…

According to every major newspaper in the country – including this one – the Imperial President was actually playing golf at Andrews Air Force Base on August 4th, 2012 which is the day this photo was reportedly taken.

Perhaps the White House could explain how President Obama can be in two places at the same time as this photo below suggests beautifully? I won’t hold my breath. It could be bad for my health. We all know these people are pathological liars. 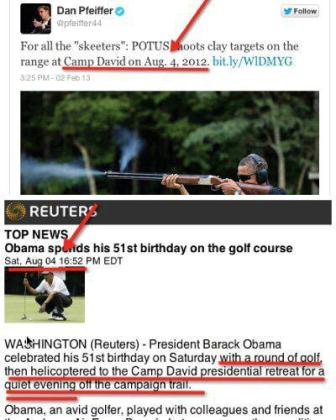 Because of the dates and Obama’s very public schedule, reaction to the truthfulness of this photo was quick. And as always, the Obama people are thinned skinned. They can’t ever take a punch. They cry. They whine. They make threats. So former Obama adviser David Plouffe pops off on Twitter, calling the skeet photo skeptics “skeet birthers.” Which, frankly, is fairly clever but it only served to fuel the Photoshopping fires everywhere. Here’s his tweet:

Yep. David Plouffe is a moron. But we’re not finished yet with this whole skeet shooting scandal… On the White House Flickr stream, folks saw this notice warning off all mischievous people who would play around with this official photo of Teh Won. Check it out:

“This official White House photograph is being made available only for publication by news organizations and/or for personal use printing by the subject(s) of the photograph. The photograph may not be manipulated in any way and may not be used in commercial or political materials, advertisements, emails, products, promotions that in any way suggests approval or endorsement of the President, the First Family, or the White House.”

Reportedly, that’s the standard notice the White House uses when releasing photos on Flickr. Whatev. It’s still imperialistic and begs to be challenged by free people. So the mockery that ensued over the questionable White House photo of the Imperial President skeet shooting has been swift and awesome. Here are just a few of my favorite Photoshopped versions I picked up from our Facebook page: 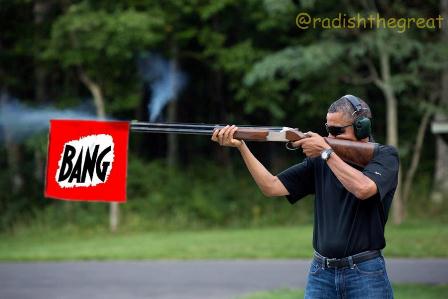 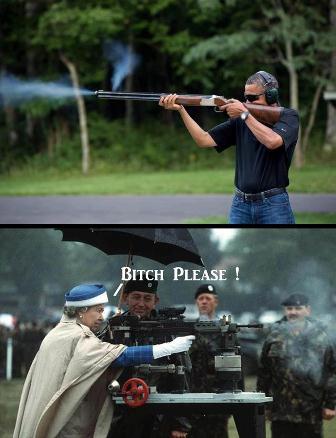 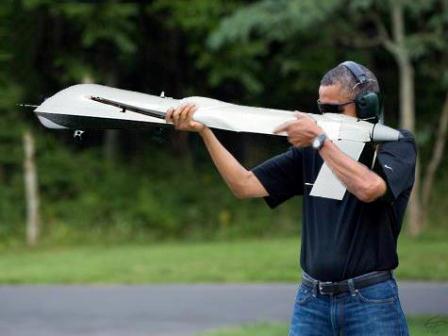 These Obama people think we’re so stupid when actually, some of us are damn brilliant!

Teach at Pirate’s Cove is blogging about “LA Times Warmist: Gore Selling Out To Big Oil No Big Deal”. Go check it out!

Stacy at The Other McCain has up a great blog post on “Bolshevik Subversive Conor Friedersdorf: Innocent ‘Liberal’ Dupe or Red Agent?” You have to go read it.

Phineas at Sister Toldjah has up a post on “More #Obamacare job losses. This thing needs to be killed.”

Professor Jacobson at Legal Insurrection has up a terrific post on “Saturday Night Card Game (Congrats Karen Finney, you made Goldie Taylor look like the voice of reason).” Good Stuff!

Emily at NakedDC has a blog post up on “The top five awesomest moments of the Chuck Hagel confirmation hearing.” 🙂

Dana at The First Street Journal has up a really good rant called “What a waste!” It’s a must read.

Uncle Jimbo over at Blackfive has up a blog post called “Chuck Hagel- Wrong for so many reasons”. It’s great.

This Ain’t Hell has a bunch of great posts up today but I like this one by the Sporkmaster on “Warrior Voices Veterans: learn to write the words they could not speak.” The video is terrific.

Michelle Obama’s Mirror has up a post called “ “Skeeter” Obama on a Unicorn Hunt at Camp David.” 🙂

American Power also has up a blog post on the Hagel hearings called “So Much for Senate Decorum…” Go read.

Ed Morrissey is blogging at Hot Air on the Senator Menendez mess with “Media wonders: Why is Menendez intervening on behalf of a big campaign donor, anyway?” It’s great.